Here is a solution to dispose of the plastic problem 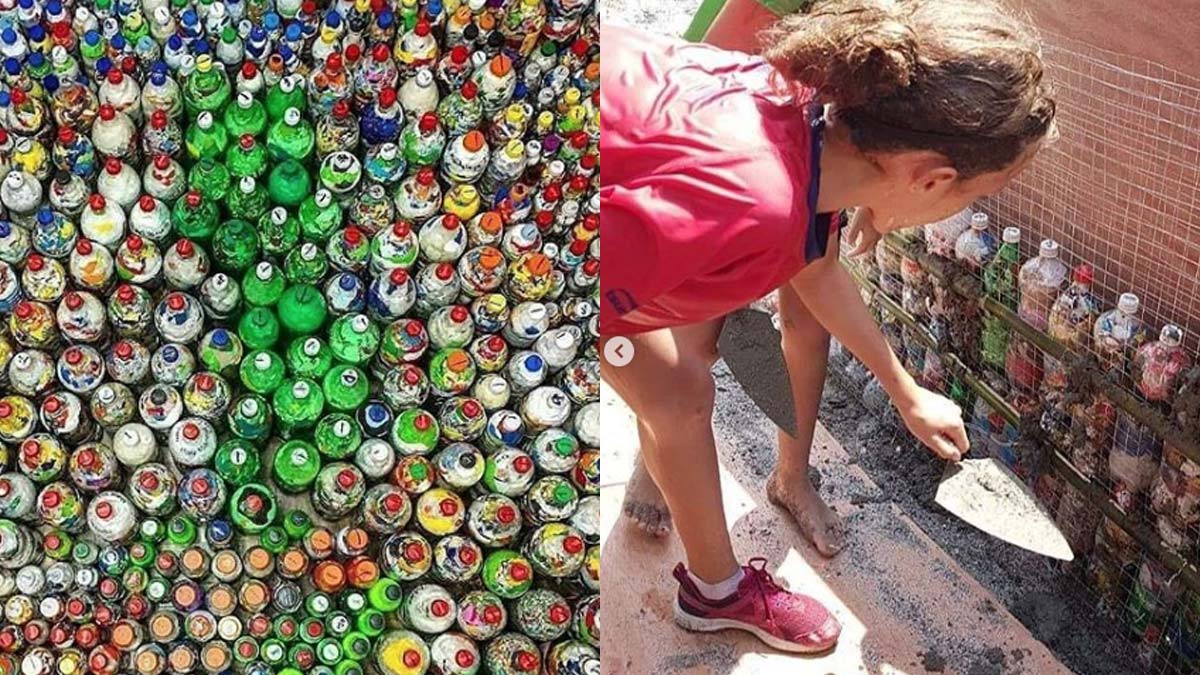 A beach hostel in Zambales uses these eco-friendly construction materials called ecobricks to build the walls of the facility.
PHOTO/S: @plasticsolutionph on Instagram

What is the problem with plastic?

Environmental entrepreneur and beach hostel owner Raf Dionisio sheds light on the plastic problem that appears to have worsened in recent years.

"Plastic isn't bad, per se. I personally don't think the use of plastic will disappear on this Earth, because it is a useful material," Raf clarifies.

But he points out that the problem centers around how people don't know how to properly dispose of them.

The co-owner of Circle Hostel in Zambales offers a bit of perspective on the matter. He says, "It's our great-grandparents who used plastic for the first time on this planet and they're gone, but their plastic is still here.

"It's not biodegradable, and it breaks down into smaller molecules that cannot be seen by the naked eye called 'microplastics.'"

Microplastics, as the term suggests, are "plastic debris" that are "less than five millimeters long" according to the National Ocean Service in the U.S.

"We must be eating some sort of plastic already," Raf says, noting that most plastic end up in waterways.

He then cites a 2018 study that found "tiny particles of plastic" in bottled water.

Raf continues, "It’s an ongoing concern. We don’t know if it’s going to kill us. There’s no study done yet... It's a challenge for us."

ways to solve the PLASTIC PROBLEM

Raf explains that there are several issues that need to be addressed in order to properly solve the ongoing plastic problem.

"Basically, we've got an awareness issue where many people still don't know about the problem," he says.

"I mean, three years ago, I didn't understand any of this. Is it reasonable to expect all of our LGUs [local government units] across the country to understand it? Not necessarily. There's a lack of information."

Raf adds that there is also "an alternative issue."

He continues, "Sometimes we don't have the right alternative.

"There's a market for recycled products. Okay, recycled, but is it a product that will sell in the market on its own? Or is it going to be a pity buy? Because if it's a pity buy, it's not sustainable."

One concept that also needs to be understood and executed properly is trash segregation.

So far, Raf has observed that the attempts to implement segregation are quite problematic.

He says, "One trash can for all. Can't segregate and it's overflowing.

"There's another kind of problem. It's three trash cans, but no signage. Where do I throw what, right? That still happens. And sometimes there's just no collection at all.

"There is also a method segregation issue. There's a collection issue, then there's a lack of recycling facilities."

effects of PLASTIC PROBLEM on LIFESTYLE

The entrepreneur gives a personal experience.

He continues, "One of my personal tactics to reduce plastic is I force myself to eat fruit, so banana is now my favorite snack.

"When I go to airport, I have banana with me. I eat it.

"When I go to the trash bins, there's recyclable and non-recyclable, but I know my banana peel doesn't belong in either of them. It's biodegradable. This is a common experience I have.

"The willingness is there, but we have to connect the chains."

Raf then elaborates on community efforts that the government has tried to implement, such as Republic Act 9003 or the Ecological Solid Waste Management Act.

He says, "Basically, every LGU is supposed to have a Materials Recovery Facility, MRF, which is short for a segregation area.

"The reality is that the implementation is quite low. We only have three out of ten barangays with an MRF and of those three, we don't know how many of them implement perfectly."

As an owner of a beach hostel, Raf says that "trash is my enemy."

He continues, "No matter how clean my place is, the number of guests that come visit me goes down when my beach is dirty.

"And I don't own the beach. Everyone owns the beach."

To address this, one of the solutions Raf came up with is the use of ecobricks.

Ecobricks.org describes an ecobrick as a "reusable building block created by packing clean and dry used plastic into a plastic bottle to a set density.

"Ecobricks enable us to take personal responsibility for our plastic."

For Raf and his team, they use ecobricks as "construction material for low weight structures like walls, dividers, gardens, farms. Stuff that doesn't have to bear weight."

He adds, "In the province, it's easy. It's a quick substitute for dividers. We basically put in a lot of single-used plastics in the bottle and then we use it in our construction."

The wall around his hostel is made with a mix of hollow blocks and ecobricks.

"1.5 tons of trash that stays there rather than goes into the ocean or a landfill.

"We've built about 20-plus structures to date, so about 10 tons. But it's a drop in the bucket. Very, very little."

One of their recent projects is making a beach bar out of ecobricks. It is Raf and his team's way of showing that "you can have a hip place and also recycle."

They launched their ecobrick campaign around three years ago.

While the plastic problem is still prevalent, Raf acknowledges that "a lot of people are responding to the call that there is a challenge facing us as a human family.

"'Let's do something about it.' I think that's the attitude we want to push throughout the next couple of years."

Raf sees that schools and LGUs are gradually doing their part.

"They're starting to teach kids, 'Oh, let’s not use plastic spoons and forks anymore.'

"There are actual laws and ordinances inside different LGUs, noh... A mayor in Negros banned plastic bags in his public market and forced the entire market to use leaves as packaging for wet goods.

"In San Fernando and San Juan, La Union, we actually did a time and motion study on the number of plastic bags that go out of their wet market every 15 minutes.

"We stationed somebody in all the main exits and we counted 600 bags every 15 minutes. That's a lot of bags from San Fernando public market.

"We also got a solution where people are trying to be positive about it. They're giving away free drinks if you clean up their beach...

"It's good, right? There are solutions for it."

Raf is positive that these environmental and sustainability movements are stepping stones to a greener and cleaner earth.

He says, "Our initial movement with ecobricks is not the end. It's just the start of the engagement with the environment.

"There's a lot you can do if you put your mind into it. There's definitely hope for the recycling industry.

"We need more action. Progress is our priority at the moment. Perfection is a long way to go, but we're getting there."

PEP.ph (Philippine Entertainment Portal) was among the members of the media who participated in the October 3 beach clean-up that happened in Subic, Zambales. This effort, which was led by shampoo brand Head and Shoulders, was supplemented by a sustainability talk facilitated by Raf.