The celebrity weddings we look forward to this 2020 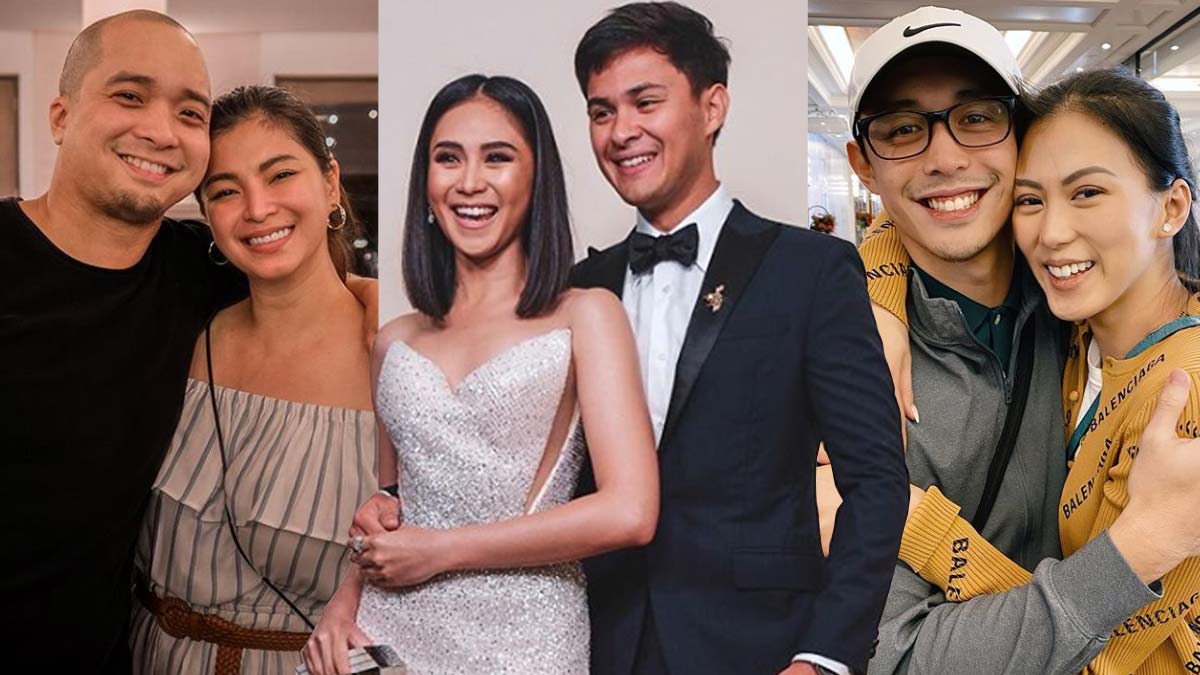 The year of 2020 promises a new set of celebrity weddings to look forward to. Showbiz fans are particularly excited about the weddings of celebrity couples (L-R) Neil Arce and Angel Locsin, Sarah Geronimo and Matteo Guidicelli, and Mikee Morada and Alex Gonzaga.
PHOTO/S: Dominic Roque via @neil_arce / Luis Ruiz via matteog / @cathygonzaga on Instagram

The year 2020 promises a new set of celebrity weddings.

Megan Young and Mikael Daez as well as Juancho Trivino and Joyce Pring have started the ball rolling.

Sheena Halili and Jeron Manzanero are also tying the knot this month.

Come March, showbiz fans anticipate the wedding of Sarah Lahbati and Richard Gutierrez, who have been engaged since 2017.

There are also rumors that Sarah Geronimo and Matteo Guidicelli are set to get married this year.

But for now, here is a list of celebrity weddings we are excited to see:

This couple's engagement was one of the most celebrated celebrity announcements in 2019, easily making theirs the most anticipated celebrity wedding.

Matteo made the announcement on November 7, 2019, a year after their actual engagement date.

Sarah, who was captured playfully squeezing Matteo's neck in the photos, subtly showed her engagement ring in the post.

The ABS-CBN actor told the concert performer-actress in the caption: "I love you my love, now and forever."

Fans and celebrities rejoiced on social media upon hearing the news, making #AshMattNowAndForever trend both in the Philippines and worldwide.

When is the wedding?

So far, the couple remains mum on the details, but there are rumors that the ceremony will happen early this year.

Nearly three years after their engagement, Sarah and Richard are finally getting married in March.

The couple got engaged in 2017, after Richard popped the question on the snowy mountaintops of Zermatt, Switzerland.

The mountainous European country is a special place for the couple, as they called it home when they were expecting their first son Zion.

Sarah was also born in Switzerland, where her Moroccan father is based.

The year 2017 turned out to be an eventful year for the couple, as Sarah and Richard announced later in the year that they were expecting their second child. Wedding plans were then put on hold.

Another celebrity wedding that showbiz fans can't wait to see is Angel and Neil's nuptials.

The pair surprised showbiz fans when they got engaged in June 2019.

Neil planned the entire proposal and brought in one of Angel's best friends, Dimples Romana, to help him.

In a July 2019 interview, Dimples recalled her conversation with Neil about his intention to propose to Angel.

She said, "He called me a couple of weeks before the ano... sabi niya, 'Dimps, magpo-propose ako.'

"So I'm just happy that this time, it's for good, and parang he's there for her."

Angel and Neil have yet to share any details about their wedding, but they have both expressed their excitement for the future.

Two celebrity couples got engaged at the end of 2019.

The first to do so were Alex and Mikee, who got engaged in Hong Kong on December 27, 2019.

The Kapamilya host-actress later shared the story of Mikee's proposal on her YouTube channel.

Wedding details have yet to be revealed, but Alex has already found her wedding dress.

The second celebrity couple to get engaged at the end of 2019 was KZ and TJ.

TJ, who turned 30 on December 30, 2019, proposed to KZ during his birthday celebration.

Friends and family used #TJxKZFinally to congratulate the couple.

In an interview with the bride-to-be in January 2020, KZ says she hopes to hold her wedding this year.

RnB singers Jay-R and Mica Javier are set to have a Boracay wedding this 2020.

But first, the couple will hold a civil wedding in Los Angeles, U.S.A. to accommodate Jay-R's family.

The singers have been engaged since 2018.

They have planned their weddings to be "simple and non-traditional."

Kris is the latest celebrity bride-to-be.

The GMA-7 actress-entrepreneur got engaged on February 6 during the surprise birthday celebration for her now-fiance Perry Choi.

Following the engagement news, Kris expresses her emotions on Instagram.

She writes, "I'm still a bit shocked with a mix of so many emotions: excitement, happiness, love, and panic.

"As exciting as it is to announce, I intentionally set aside time to savor this latest milestone in my life. And, just share once the 'ENGAGED' status has finally sunk in.

"The gist: I had planned and organized a surprise party for Perry to celebrate his 36th birthday.

"Little did I know, a carefully planned surprise proposal was waiting for me, too. Back to back surprise! The rest is history!"

Before the end of 2019, Jinri tied the knot with her partner John in a traditional Korean wedding ceremony.

The former Pinoy Big Brother housemate got engaged in July 2019 and married later that year.

But Jinri clarifies that her "real official wedding" will be in March.

David was the first Semerad brother to get engaged in 2019.

He proposed to partner Gwen Zamora.

The couple plans to marry some time this year in Boracay.

Anthony is the second Semerad brother set to get married soon.

Anthony proposed to celebrity entrepreneur Sam Pinto in August 2019 during a trip to his hometown in Australia.

Bride-to-be Sam recounted the proposal to PEP.ph in November 2019.

The basketball player had an elaborate proposal planned out for her.

It involved a helicopter ride over the Gold Coast and a gondola ride where Anthony proposed to Sam.

The former Miss Universe Philippine titleholder and the Camarines Sur governor had been together for five years when they got engaged.

Rachel announced the news on her Instagram in November 2019.

They have yet to reveal any wedding plans.