Lockdown or mass testing? A look into Italy and South Korea's courses of action vs. COVID-19 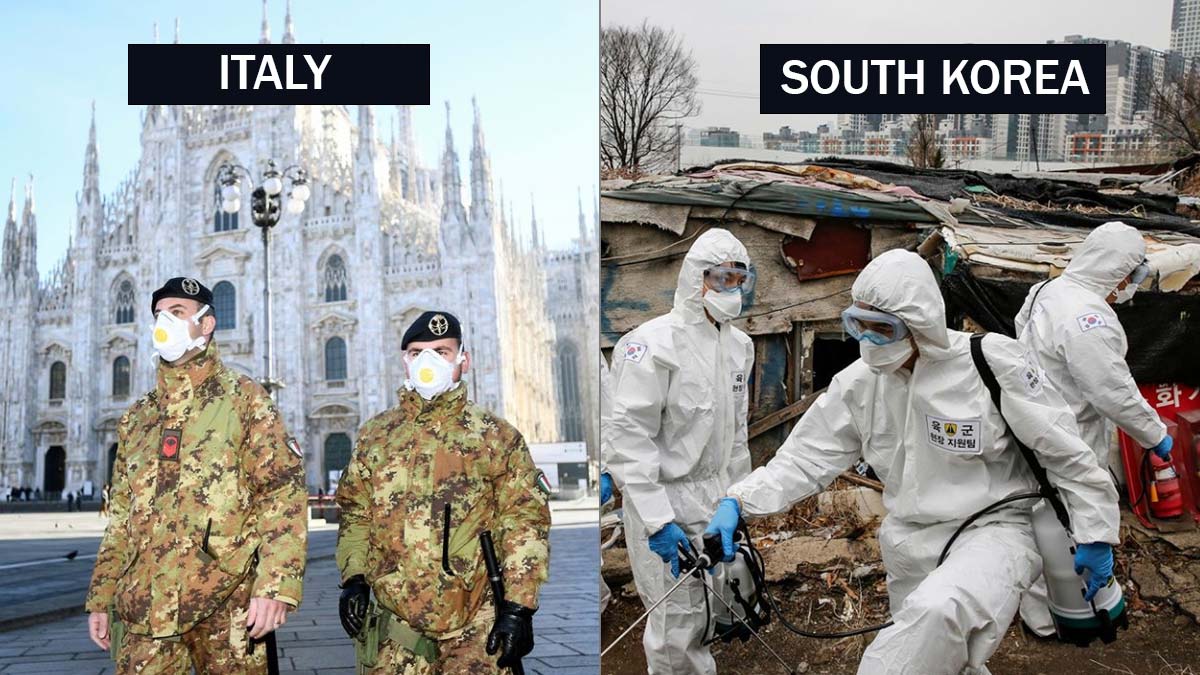 Which is the better approach to COVID-19 prevention:lockdown in Italy or mass testing in South Korea? The World Health Organization says it should be a combination of both.
PHOTO/S: @telegraph on Instagram

The novel coronavirus disease (COVID-19) is the "defining global health crisis of our time," the World Health Organization (WHO) Director-General Tedros Adhanom Ghebreyesus says in a statement released March 16, 2020.

Currently, two of the hardest-hit countries outside China have taken different approaches to combat the virus.

Nationwide lockdown in Italy—with a total number of 27,980 confirmed cases and 2,503 deaths as of March 17.

Mass testing in South Korea—with a total number of 8,320 confirmed cases and 81 deaths as of March 17.

Is one course of action more effective than the other?

In essence, a lockdown is proposed to restrict the movement of people and prevent the gathering of large crowds.

It obligates citizens to stay at home and to practice social distancing, which WHO has categorized as a protective measure against COVID-19.

Prime Minister Giuseppe Conte initially placed the northern Italian region of Lombardy under lockdown, labeling it as a "red zone."

Lombardy is the region where the first local COVID-19 patient was reported.

The first patient was detected in mid-February. By March, confirmed cases and deaths jumped up significantly.

Lombardy remains the center of Italy's local outbreak, which has led the government to impose a lockdown on the region.

In an article by Business Insider, Italians have to follow these set of rules:

The lockdown is said to last until April 3.

TOUgH CHOICEs IN ITALY: who lives, who dies

Italy was placed under nationwide lockdown after its number of confirmed COVID-19 cases surpassed 9,100 and its death toll hit 463 on Monday, March 9, 2020.

It is unfortunate that the number of cases and deaths in the country has not decreased at press time.

Recent reports have depicted Italy as a war zone with Italian health experts bracing themselves for the possibility of imposing a tough criteria: who will receive intensive care, who will not.

This protocol is to be imposed when hospitals nationwide can no longer handle the influx of COVID-19 patients.

The sad reality is that the implementation of this criteria will leave the country's elderly population in a vulnerable state.

A document obtained by The Telegraph reads: "The criteria for access to intensive therapy in cases of emergency must include age of less than 80 or a score on the Charlson comorbidity Index [which indicates how many other medical conditions the patient has] of less than 5."

In other words, doctors fear that some patients will "in effect be left to die."

One doctor sums it up: "[Who lives and who dies] is decided by age and by the [patient's] health conditions. This is how it is in a war."

South Korea, on the other hand, has not imposed any absolute restriction to limit the movement of people.

Instead, efforts to contain the virus are focused on mass testing.

As Al Jazeera news outlet illustrates in an article, "authorities are testing hundreds of thousands of people for infections and tracking potential carriers like detectives, using mobile phone and satellite technology."

The local outbreak began in late January in the region of Daegu.

Many of those infected are members of Shincheonji Church of Jesus, a large congregation that people consider as a cult.

This distingusihing factor gave the government a wider scope as to the extent of possible infection and a strong lead to start investigation.

Since then, South Korean health experts have become aggressive in their tracing tactics.

According to the same article by Al Jazeera, South Korea has enforced a law that "grants the government wide authority to access data: CCTV footage, GPS tracking data from phones and cars, credit card transactions, immigration entry information, and other personal details of people confirmed to have an infectious disease."

Some of these details are later made public to call to attention any person who may have been exposed and to get themselves, their friends, and their family members tested.

Testing facilities, which are mostly designed as drive-through services, are readily available to concerned citizens.

In an article, BBC details how these tests are administered: a long swab stick will go to the back of one's mouth and throat and the collected sample will be placed inside a long test tube.

Afterwards, another swab will go up the nose.

The entire process, from the test procedure to the test result, is about "five to six hours."

Professor Gye Cheol Kwon, chairman of the Laboratory Medicine Foundation in South Korea, tells BBC that the country has "learned the risk of new infection and its ramifications" from its experience with the Middle East respiratory syndrome coronavirus (MERS) outbreak in 2015.

The MERS outbreak claimed 36 lives and pushed their Centres for Disease Control to reassess their health care strategy.

And so, for the COVID-19 outbreak five years later, "trace, test, and treat" has become their main strategy to control its spread.

The BBC reports that four companies in South Korea have been given approval to make COVID-19 testing kits, meaning the country has the capacity "to test 140,000 samples a week."

Professor Kwon tells the British media outlet, "I think that early patient detection with accurate tests followed by isolation can lower the mortality rate and prevent the virus from spreading.

"To learn from the past and prepare systems in advance… that might be the true power to overcome this new kind of disaster."

More than 222,000 people in South Korea are being tested for COVID-19 every day.

Out of those numbers, nearly 8,000 are confirmed cases.

This has made South Korea the model for mass testing for COVID-19 so far.

Infection control expert Kent Sepkowitz, MD, of Memorial Sloan Kettering in New York City writes in his opinion piece for CNN that there are several factors as to why South Korea's mass testing strategy has been a success story.

One clear difference is the age. According to the article, "90% of the more than 1,000 deaths occur in those 70 or older" in Italy.

In South Korea, only 20% of the cases involved individuals 60 years old and up.

According to data posted by U.S. federal agency Centers for Disease Control and Prevention (CDC), adults over 60 and those with serious medical conditions like heart disease, lung disease, and diabetes are at higher risk of getting COVID-19.

Thus, Sepkowitz suggests that mass testing is not the only solution to save lives, however, it is a course of action that countries need to work on urgently.

WHO underlines, "The most effective way to prevent infections and save lives is breaking the chains of transmission. And to do that, you must test and isolate."

WHO Director-General Tedros Adhanom Ghebreyesus says it is "the backbone of the response."

On March 16, Tedros notes "a rapid escalation in social distancing measures, like closing schools and cancelling sporting events and other gatherings."

But WHO warns, while the practice of social distancing "can help to reduce transmission and enable health systems to cope" and "handwashing and coughing into your elbow can reduce the risk for yourself and others... on their own, they are not enough to extinguish this pandemic."

The Director-General advises countries to take "a comprehensive approach," the combination of social distancing, proper hygiene, and mass testing "that makes the difference.

He says, "You cannot fight a fire blindfolded. And we cannot stop this pandemic if we don’t know who is infected.

"We have a simple message for all countries: test, test, test. Test every suspected case."

WHO assures that "more tests are being produced to meet the global demand."

The COVID-19 outbreak was first reported in Wuhan, China in December 2019.