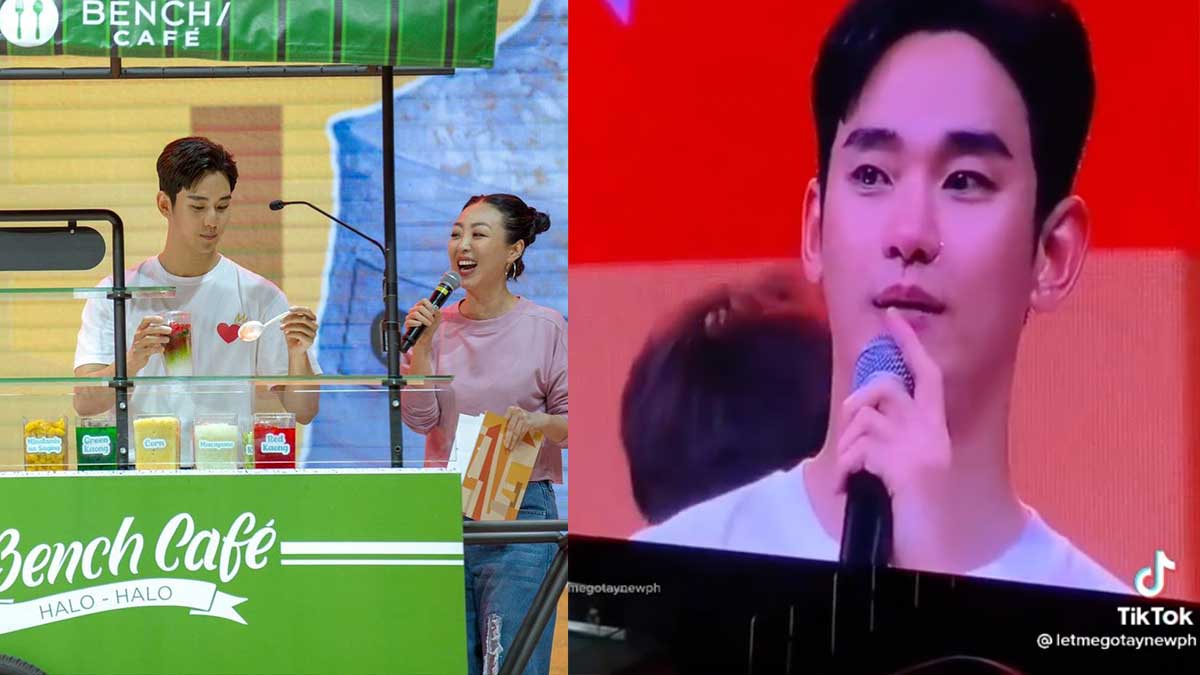 "It's Okay Not to Be Okay" star Kim Soo Hyun got emotional after seeing his Filipino fans last Friday, June 10, 2022, during his "One Extraordinary Day with Kim Soo Hyun" fan meet event at the SM Mall of Asia Arena in Pasay City.
PHOTO/S: @iamsamoh on Instagram / @letmegotaynewph on TikTok

The heartwarming moment happened during the One Extraordinary Day with Kim Soo Hyun, the fan-meet event organized by Bench.

The event also serves as Soo Hyun’s first-ever face-to-face fan meeting since the start of the pandemic.

During the last segment of the program, a video was shown in which Pinoy supporters gave their messages for Soo Hyun.

Soo Hyun, who is one of Korea's highest-paid actors, could not contain his emotions while watching the video prepared by his fans and was reduced to tears.

In response, Soo Hyun addressed his Filipino fans and thanked them for their overwhelming love and support.

“I am so happy to be here with you, say hello, and spend time with you because it’s been a very long time,” expressed Soo Hyun with the help of an interpreter.

The It's Okay Not to Be Okay actor also promised his supporters to work hard and visit the country to meet them more often.

He said, "I will be working very hard so that I come back and come back often, and hope to see you all again soon with good news about projects.

"I’d love to come back and see you all again."

Sam Oh, who served as the event's host, took to Instagram to share some of the highlights and "kalurky moments" of the event.

The radio/TV host wrote, "There were so many kalurky moments in this fun meet like when the guy dropped the pizza Soo-hyun was supposed to taste (I died. And then died some more when he ate it anyway), when he initiated close contact with fans when it wasn’t on the script and when he cried after watching the video his fans made for him. What a guy. And what a comeback, Bench! [emoji]"

Soo Hyun also learned how to create halo-halo, which he was able to try the day before the fan meet.

He started his special halo-halo with a twist using shaved ice, green gulaman, and red kaong. He also added some ube and macapuno.

But fans were surprised when Soo Hyun added unusual ingredients—kamias and carrots—to his version of halo-halo.

After preparing the dessert, a lucky fan had an up-close encounter with Soo Hyun and accepted his version of the Pinoy dessert.

Fans learned more about their idol during the question-and-answer segment of the program.

One of the questions asked was, "Can we expect you in a drama soon? Can you give us a hint?"

Soo Hyun answered, "I'm actually going through a lot of scripts right now and I really hope to bring good news very soon. I'll work on it so I will have good news for you very soon."

Another fan asked: "What inspires you to keep going?"

Soo Hyun said, "I feel like no matter how lacking I am, when I have this many people who are cheering me on, I will go on.

"I would like to let you know that I will be working very hard and I want to thank you all so much."

HOT STORIES
We are now on Quento! Download the app to enjoy more articles and videos from PEP.ph and other Summit Media websites.
Read Next
Read More Stories About
kim soo hyun, Bench, One EXtraordinary Day with Kim Soo Hyun, Kim Soo Hyun Live in Manila, K-Drama, south korea, It's Okay not To Be Okay, my love from the star, hardcore fans, con-00074
Post a Comment
Featured
Latest Stories
Trending in Summit Media Network