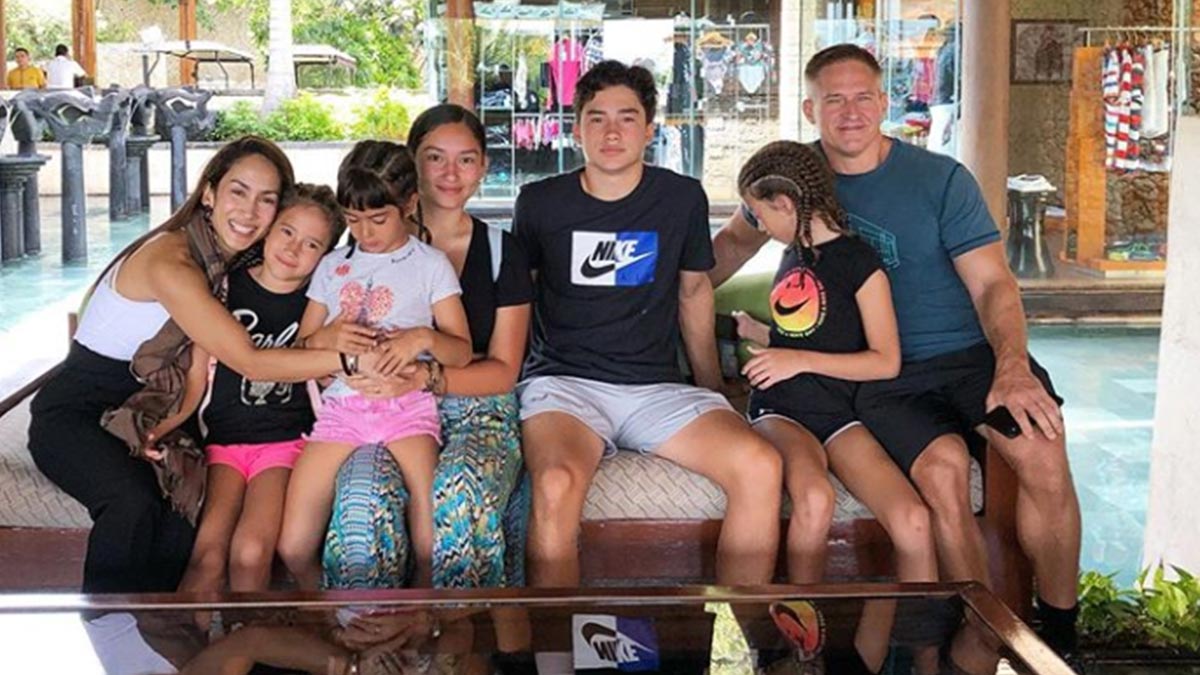 Pinoy Gen-Xers remember Ina Raymundo as the "Sabado Nights girl" from the '90s.

The 43-year-old ABS-CBN actress is now an amazing mom to five amazing children and her Canadian-Ukranian husband Brian Portunak.

Being a proud mom to five beautiful children—Erika, 16, Jakob, 15, Mikaela, 10, Anika, 8, and Minka, 5—Ina usually gives her fans a sneak peek into their lives through her Instagram.

In an interview with PEP.ph (Philippine Entertainment Portal) last May 23, Thursday, Ina opened up about the challenges of parenting teens now that two of her five kids are now in their adolescenct stage.

The Ngayon at Kailanman actress admitted that it took some time before she finally realized that her children are growing older.

Ina and her husband Brian have developed an amazing relationship with their children, which explains why they didn't feel the need to become strict parents.

But Ina noted that they have always been guiding their children as they grow older.

"And the more you say no to her, the more she will insist on doing it.

"So, prayers na lang talaga na yung mag-figure out na, 'No, I don't want to do this.'

ERIKA: THE NEXT "SABADO NIGHTS GIRL"

Ina has always been open about their family on her social media accounts.

However, it was only in November 2018 when she finally introduced her daughter on Instagram.

In an Instagram post on July 2016, Ina revealed the reason why she doesn't share much about her eldest child and wrote, "Sa lahat ng mga curious sa eldest ko, she wants anonymity. She doesn't want to be on my IG.

"I truly respect that but I just want to share that my 14-year-old daughter is beautiful, smart, super strong (like her dad) and very independent."

In a previous interview, Ina expressed that she wants her daughter to be named the next 'Sabado Nights girl.' Ina has owned this tag since 1995.

And her daughter has already shown interest in joining showbiz.

Last May, the mother-and-daughter tandem did an amazing photo shoot with one of the country's top fashion photographers, Mark Nicdao.

"I think it's done in good taste, definitely..."

Since Ina has done sexy photo shoots in the past, is she going to allow her daughter to do the same when she grows older?

She answered, "Siyempre, parang feeling ko open siya in the future na mag-sexy photo shoot for a magazine, probably. I will not stop her.

"I mean, as long as it's done in good taste. Yun lang naman yung importante."

Does she talk to her children about relationships?

Ina said their family is quite open about the subject, "Basta sinasabi ko sa kanya enjoy whatever it is that you have, but also leave some for yourself.

Ina reiterated, "That's one thing talaga na I will teach my four daughters, parang don't give your all kasi especially if you're young.

"It will just destroy you. Too much love will kill you.

"Sorry, but I believe in that. Too much love will really drive you crazy.

"You need to have a certain level of being in control of whatever it is what you do.

"You have to be in control, not out of control, or else, you would go crazy."

Usually, it's the parents who pass on their wisdom to their children as they grow older.

But Ina revealed that they also learn new things from their children.

"I learned na before you try to do anything, you do research.

"But now, I try to do more research before I commit to buying something or, you know, going somewhere," she admitted.

Aside from her daughter, Ina and Brian's unico hijo Jakob also went viral on social media for his charming looks. Many netizens commented that her son is a heartthrob.

Asked about Jakob's reaction to all the attention he's been getting lately, Ina said, "He's so cool about it.

Unlike their eldest, Ina said her son has yet to think about joining showbiz.

She explained, "Feeling ko maybe he's too young to think about it."

But the actress noted that she wants Jakob, who is currently into baseball, to become a role model for teens his age.

"He should also be a role model for kids when it comes to sports.

"Kasi he's really fit, he's into sports, and he takes it seriously.