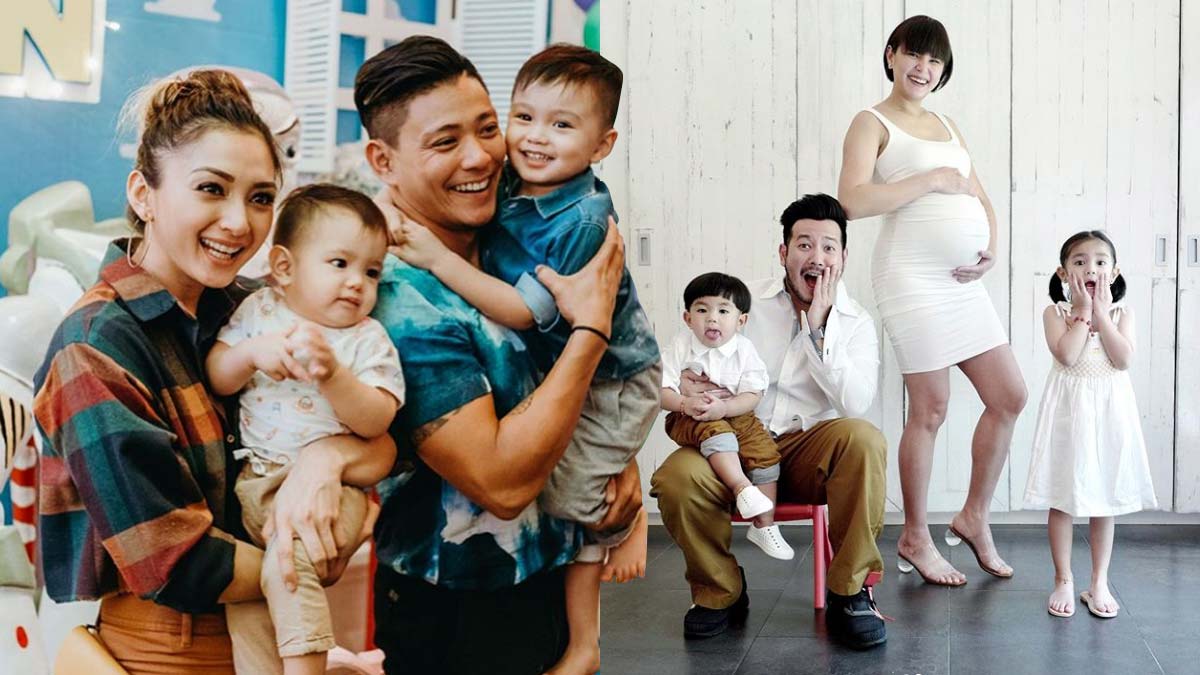 Iya Villania and Drew Arellano (L) are adding one more to their two; Isabel Oli and John Prats (R) are doing the same!
PHOTO/S: @drewarellano / @isabeloliprats on Instagram

In the middle of the COVID-19 crisis in the country, these celebrity families are feeling blessed: they have a new bundle of joy joining them in 2020.

John Prats and Isabel Oli happily announced, during the second week of quarantine, which took effect March 15, that they were expecting their third baby.

Due to give birth this July, Isabel is on her 24th week of pregnancy.

The couple has two kids: Feather and Freedom.

Another celebrity family expecting a third baby is the Arellanos.

The reaction on the GMA-7 travel host's face is priceless.

The former actress had a clever way of announcing she was pregnant with her second baby.

She posted a flat lay of the ingredients of her pasta dish, which involved a jar of Prego Pasta Sauce.

Jewel and husband Alex Kurzer are having another girl.

They will name her Emerald.

On Valentine's Day 2020, Bangs Garcia, husband Lloydi Birchmore, and daughter Amelia announced another bundle of joy was soon to come.

The soon-to-be mother of two is on her sixth month of pregnancy.

The GMA-7 couple shared this news on Christmas Day 2019.

Though their baby boy is due in July 2020, Max is already mulling home birthing because of COVID-19.

“Not a hundred percent sure about the home birth because I have to check the positioning of the baby, kung kaya ko.

"So, I've still been talking to my OB-GYN about having labor at a hospital."

After three years of marriage, Paulina Sotto and husband Jed Llanes are in the family way.

The daughter of Vic Sotto, with former actress Angela Luz, posted the baby news days before the community quarantine took effect in March.

The lola-to-be is super excited to meet her apo, Baby Sachi.

Angela wrote in an Instagram post: "Amidst all this chaos I would like to remain hopeful and optimistic and completely trusting in God... because I owe it to little SACHI to believe that the she will be delivered into a world that is normal and safe and happy, and without threat of a dreaded virus.

"My dearest SACHI... I love you more than you can possibly imagine."

At the start Of December 2019, Pinoy Big Brother alumnus Slater Young and wife Kryz Uy announced that they were expecting.

Fast forward to March 2020, Kryz is now on her 30th week of pregnancy.

Over the weekend, Slater's family surprised the fashion vlogger with a baby shower held at the couple's home.

They are going to have a baby boy.

The cousin of Georgina Wilson and Isabelle Daza is now seven months pregnant.

She and husband, TV host Cliff Ho, are having a girl.

Five months after getting married, football star Phil Younghusband and wife Margaret are in the family way.

It's a baby boy for the couple.

Pepe and his wife, visual artist Sarah Mallari, are expecting a baby girl.

The actor looks to his future daughter as a reminder that everything will be okay in the end.