Meet the lovely daughters of Ronnie and Mariz Ricketts 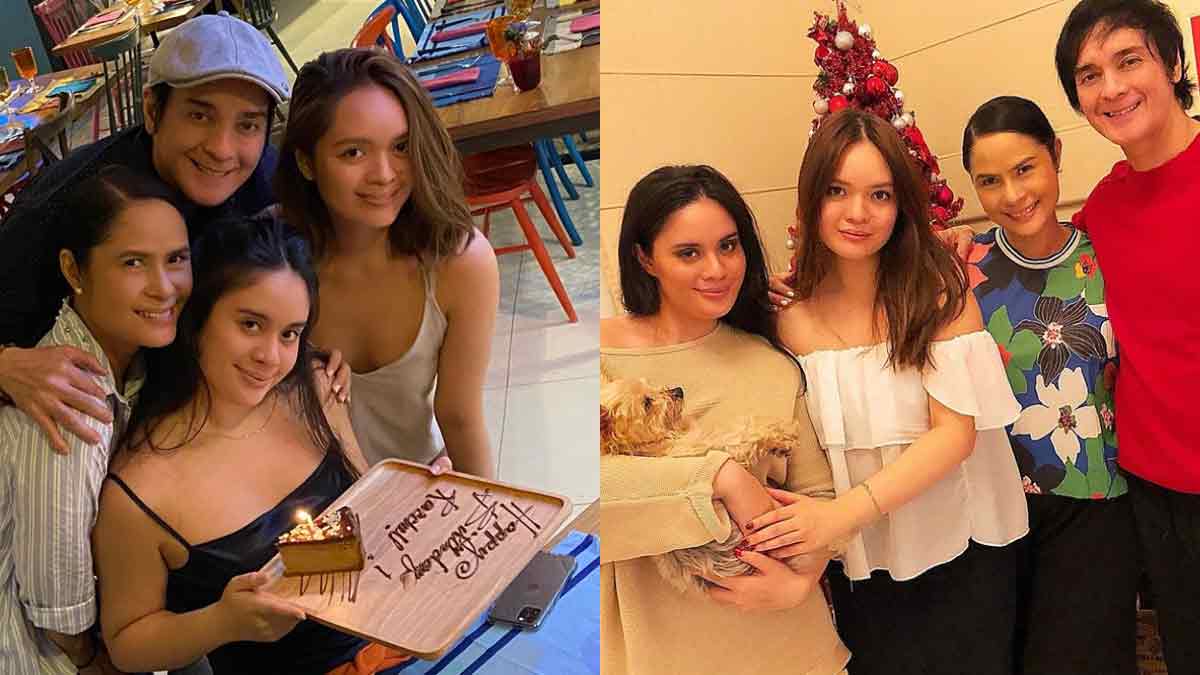 Meet the beautiful and talented daughters of Ronnie and Mariz Ricketts: Marella (in white top) and Raechelle (in black / beige top).
PHOTO/S: @marizricketts on Instagram

The two daughters of Ronnie and Mariz Ricketts, Marella and Raechelle, have had stints in showbiz.

Marella did some acting roles and commercial ads before her current work as a feature writer for a well-known publishing company.

According to Ronnie, "She concentrates a lot of her efforts on corporate tasks and artistic ventures.

The proud dad tells PEP.ph (Philippine Entertainment Portal) in an email interview on May 22, 2020, "She's quite excellent in those roles. She's truly versatile and is always keeping her options open."

Raechelle, on the other hand, made her showbiz debut last year through the action flick Exit Point, where she showcased the martial-arts skills she picked up from her dad.

"I really enjoyed it," she tells PEP.ph via the same email interview.

"If any good opportunities come my way, I could probably give it a try."

Before the enforced quarantine in March, Raechelle did her second feature film.

It was a biopic of former senatiorial candidate and cardiologist Doc Willie Ong, with Raechelle playing the wife of the protagonist.

Ronnie directed the movie and Mariz was also part of the cast.

Raechelle relates, "There were a lot of drama scenes. It was hard for me.

"But with the support of the whole production, especially my parents, I was able to do it."

The Ricketts sisters are both into sports and the arts.

Marella is into yoga, while Raechelle is more into biking.

When it comes to the arts, Marella loves to read and write, while Raechelle loves "making illustrations and watching old films."

They also have a shared love for the ocean.

Raechelle says, "I'm passionate about animals and the environment.

"My dream job is to be a Marine Biologist or a designer that focuses on Enviromental or Wildlife Conservation!"

Ronnie says that Marella is more extroverted than her younger sister.

He says, "Marella loves to travel and is into discovering and exploring new places and meeting people.

"Raechelle is more comfortable with a smaller group and familiar people around her.

"Both of them love to bake and cook. But when it comes to food and trying out new things, Marella is more adventurous with food.

Between his two daughters, who takes takes more after him and who does after Mariz?

Ronnie says, "When it comes to features, some people would say Marella looks like her Dad and Raechelle resembles her Mom Mariz.

"Personality-wise, they're a blend of both," with Marella appearing more "sensitive and emotional one like Mommy."

However, when it comes to making decisions and achieving one's goal, Ronnie says Marella gets her spunk from him.

As for Raechelle, she gets her "warm and friendly attitude, being quiet and alone" from her mother.

Also from Ronnie, Raechelle has inherited his "humor, easy-going [personality], soft spot for the underprivileged, and love for sports."

Continue reading below ↓
FOR MORE STORIES

Ronnie acknowledges that his girls are no longer kids but in his mind, they will "remain my babies forever."

The former ‘80s action star is also aware that Marella and Raechelle need to be independent to become well-equipped for life.

"But, because Mariz and I were able to build trust and confidence with our daughters, eventually, I was able to let go.

"I believe learning the ropes of life [begins with] living your life to the fullest. I was very independent growing up.

"I learned to do things on my own at an early age and learned to rely on my own instincts when making decisions.

"That absolutely helped me figure my way out into the world."

With the daughters now young adults, Ronnie is proud to see them "use their amazing wings."

He beams, "We do so many things together, and those are all engraved in my head.

"From working out together, to cooking and eating together, to nonstop chatting, to making movies, to traveling, to doing charity works.

Ronnie is also proud to say that both his daughters have graduated from college.

"That's a good one, not just for me and my wife, but most of all for them."

The actor-turned-director commends Marella and Raechelle for their sensibility as well.

"Though they have their independence, they're very cautious when maneuvering themselves through life's journeys.

"In today's world, it is important to be smart. I love seeing my daughters become their own selves and live their lives according to the path they feel comfortable trekking."

No matter what age his daughters are, Ronnie wants to continue to be their "protector."

"I continue to play the role of their dad who is always present, ready to be by their side whenever they need me.

"I will continue to provide happiness in the best way I know."