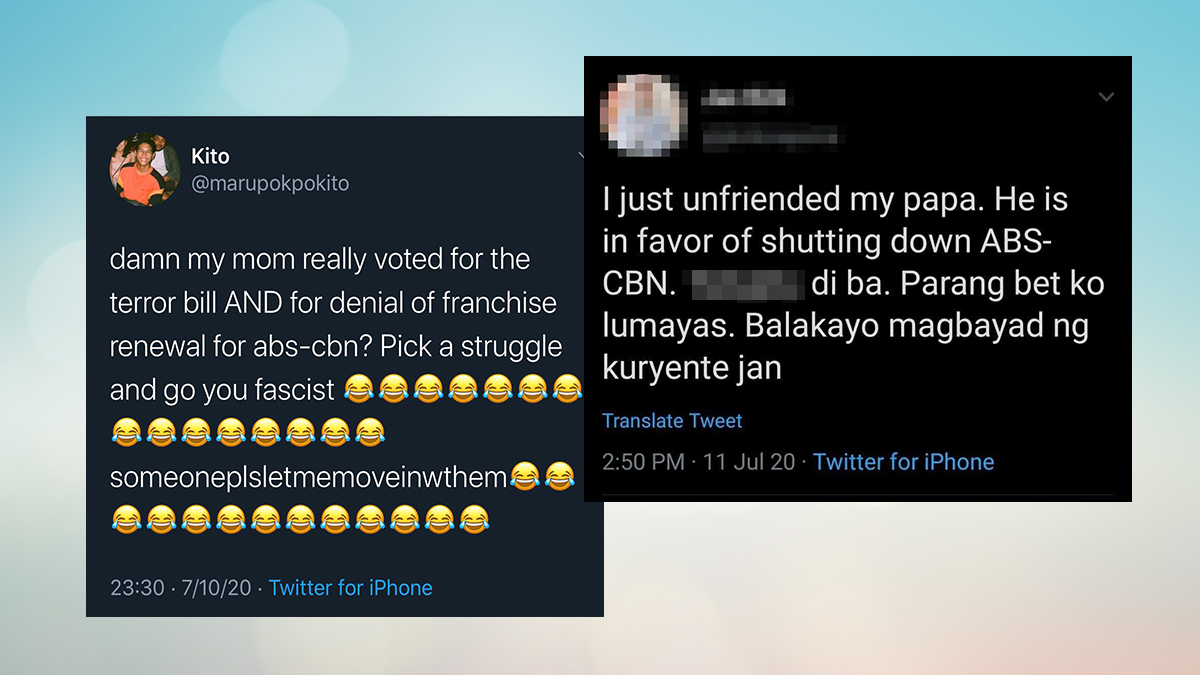 Kito Noel and Kirk Nayona denounced their parents on social media because of politics. Were they being ungrateful and brash or were they being brave and principled?
PHOTO/S: Screengrab @marupokpokito / @jkirknayona on Twitter

Politics can often be divisive.

Sharply dissonant views can result in painful disagreements that put families and friends at odds with one another.

These past few days, two such families became the talk of the town.

Kito's tweets about his mother went viral after he called her out on social media for supporting both the Anti-Terrorism Act and the junking of ABS-CBN's franchise.

The young Kito called out his mother as a "coward" and a "fascist."

He went on to urge the electorate not to vote for his mom in the coming 2022 elections, should she decide to run for another seat in government.

Kirk also took to social media to call out his father for the latter's "insensitive posts."

His dad had apparently posted his support for members of the Lower House who voted to deny the Kapamilya network's application for a new franchise.

Kirk not only called out his dad on Twitter, but also unfriended him on Facebook. Then he threatened to cut off their electricity and Internet.

netizens PUTTING DOWN KITO AND KIRK

Since then, however, both Kito and Kirk have deactivated their social media accounts.

There was too much flak from netizens and naysayers, who criticized them for being "ungrateful" kids.

Twitter user @RosalJaneRuda said it must have been painful for Kito's mom to get that kind of treatment from her son.

Twitter user @lesssiiie also believed that Kito's reaction was "too much," and promised to never do the same thing to her mother.

Meanwhile, Twitter user @NufoneHudiz, reacting to Kirk, said she would never ask a sibling to leave her house even if they had opposing political views.

She wrote: "My brother who’s living in the house I own—eats my foods, uses my electricity, my internet, my water, is a typical antigov kid. Pero hindi ko naman pinalayas... Hindi ko din naman sinusumbatan. These kids are just intolerant. Freedom of speech my ass."

The tweet read: "Agree. Feel bad that politics divided us all. Imagine, you even cursed and humiliated your father by bragging that you [paid for] everything."

On the other hand, there were those who came to the defense of Kito and Kirk.

Twitter @Atistah commended Kito for "bravely" calling out his own mother.

The Twitter user wrote: "Kudos! No, I don't see this as cyberbullying own mom but a son who loudly condemns reprehensible stances that adversely affects the nation. Maraming bulok sa sistema bec too many coddle/cover up/defend the wrongs of their fam/relatvs/friends or stay mum. This lad bravely didn't."

Echoing the same sentiments, Twitter user @fudgetajar said: "Some baby boomers and Gen Xers calling what Kito Noel did shaming his lawmaker mother online as immature and kulang sa palo. Please do not tell these kids to repress what and how they feel. Bowing to the powers that be is what made us reach this pitfall."

Then Facebook page DDS-CBN pointed out that Kirk is an ABS-CBN employee, telling those bashing Kirk that his reaction was understandable.

Part of the post read: "You people forget the fact that he works in ABS-CBN, and his father is in favor na mawalan sya ng trabaho, in the middle of a pandemic.

A safe guess would be that "Poon" referred to President Rodrigo Duterte. The biggest numbers rooting for the demise of ABS-CBN are the Diehard Duterte Supporters, aka DDS.

PEP.ph (Philippine Entertainment Portal) asked its readers on Facebook to share how they deal with family members with political views contrary to their own.

Most answers agreed on one thing: It's about respecting each other's opinions.

As PEP.ph reader Mhean Evasco put it: "I treat them with respect. I may unfollow them but that doesn't mean I dont love them. We engaged in small debate to know each other's POV. But at the end of the day, we're still a family! No one can change that."

For his part, PEP.ph reader PJ Valdez Abogado noted that it is always better for families to argue their views privately rather than humiliate each other publicly. 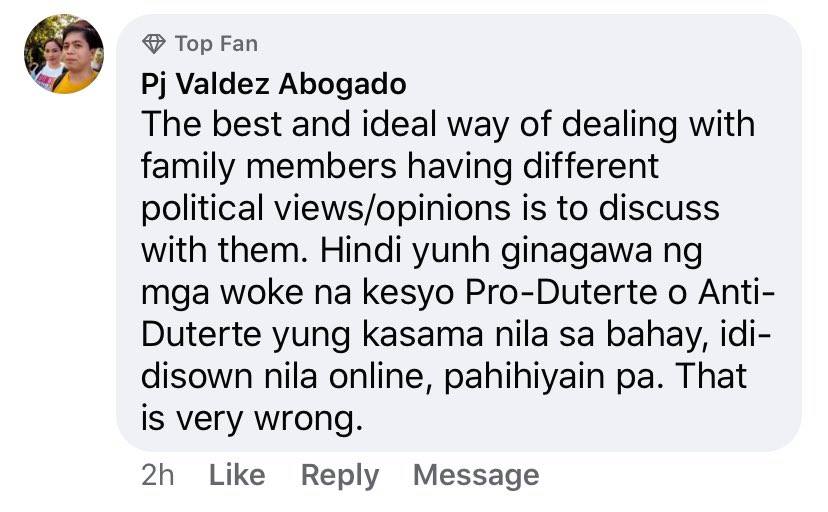 There are some families, in the meantime, who have made the decision not to talk politics at home, period.

Explaining, PEP.ph reader Mikee Alvarez said: "We don't deal with it, besides no matter how on point or not our political views are, it will be always offensive.

"Because opinions are offensive as we we're not sharing the same beliefs. I am not anti or pro-DDS because we don't need to support nor bash them.

"The most important thing is even [if] you and your family don't ride on the same boat, we still care, still aware, and understand though the understanding is not mutual." 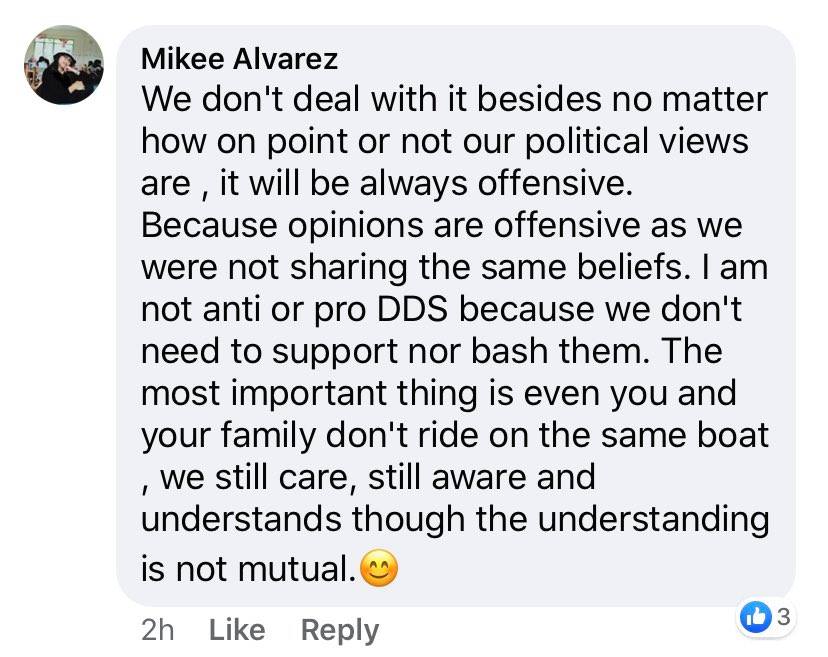 So, especially if we live under one roof, it is best to educate one another and, together, navigate these tough conversations with civility.

This, of course, works when both sides make the effort to keep an open mind.

In the end—always seek to educate, never to humiliate.