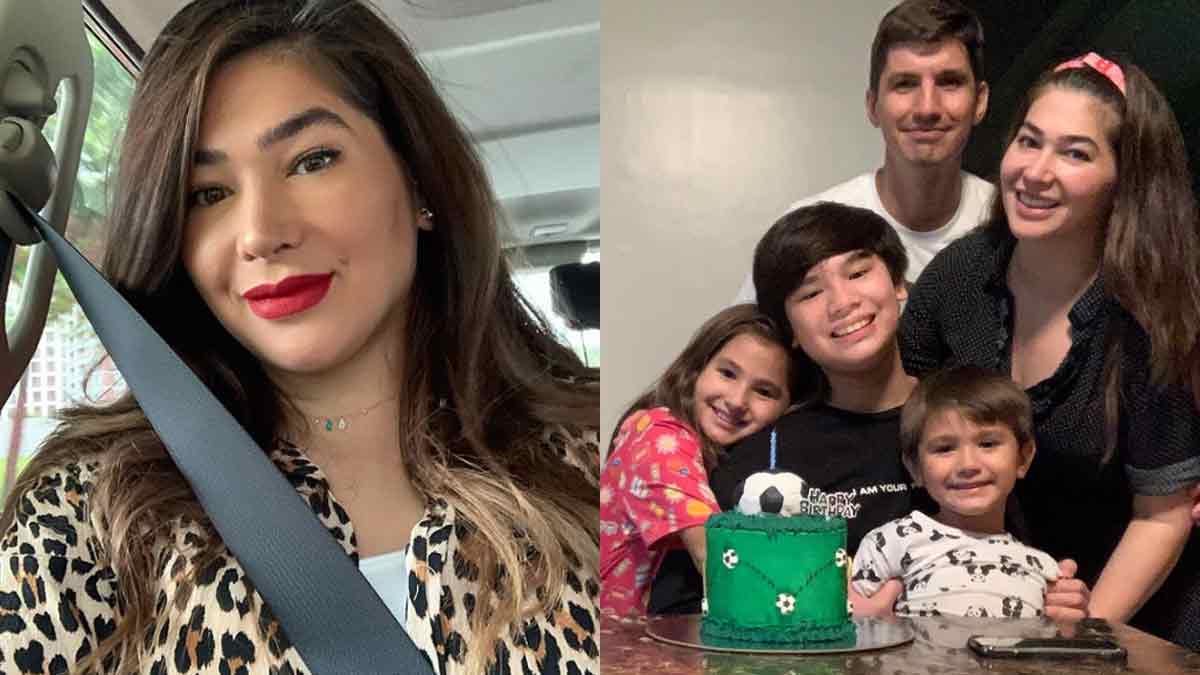 Jackie Forster believes conflict is an important learning point for children. Jackie has five kids: (L-R) Caleigh, Jared, and Yohan. Her two eldest sons are Andre and Kobe Paras (not in photo). She is married to Michel Franken (in white).
PHOTO/S: @jackie_forster on Instagram

Should parents allow their kids to see them fight?

Former actress Jackie Forster shared her views on this when she appeared on the livestream show of former Bb. Pilipinas-World Mafae Yunon Belasco last June 23, 2020.

Jackie and Mafae, who are both mothers, agreed that it was necessary for kids to experience this.

Jackie first asked Mafae, "If my husband and I are arguing about something, I don't tell my kids to go because it's none of their business.

Mafae replied, "We have them there and then later on, we apologize and explain to them."

Mafae, who is married to former PBA star Nic Belasco, believes that children shouldn't be sheltered from conflict.

The CEO of motivational company Mafae Management Consultancy said, "It's better for us to teach them now and to make things a 'reality' instead of sugarcoating them.

"At least they're equipped when they go through the door, when they leave our house.

"You know, parents or couples fight. I think it's something that makes a couple grow.

"Because once there is a dispute, and if we can be honest about our wrongdoings or even apologize to the kids, 'Sorry you had to see that, but this is why.'"

Jackie wholeheartedly agreed with Mafae's sentiment: "I feel like it’s so—I'm sorry, but it's true, right? It’s so Filipino for parents to be like, they'll argue behind closed doors.

"And then suddenly, they're separating and the children think it's their fault, right?

"It had nothing to do with the kids."

Jackie added that "shielding" kids from conflict would be a missed opportunity for growth.

"It's a learning point," she continued.

"Obviously, if it's not age appropriate, then you don't go there."

Jackie was thankful that Mafae shared her views on the matter.

The mother of five said, "I was wondering because I haven't really brought that up with a lot of my friends.

"Obviously, first, because I just got back and sometimes you're scared to be judged. Like, 'Why do you do that?'

"I'm not in a place in my life right now where I want to argue. I just want to be with like-minded people and kind of share information... it's good that you made me feel assured."

Mafae then reassured Jackie: "Well, you know, everyone has their different parenting styles. I think what works for us…

"With the children, that's something that [Nic and I] always agreed.

"We're not going to shelter anything. Why should we? Going out there in the world, that's what happens. That's the real deal.

"People will fight, people will argue. At least they know what to expect or what to do, you know? Instead of 'Oh no, I'm scared. I want to hide.'"

Jackie pointed out that when parents try to shield their kids from conflict, the young ones would not know how to handle it in the future.

The celebrity mom remarked, "They get so intimidated by confrontation that they just fold and they can't get over it.

"And they can't do the next task or can't get over that relationship or see the teacher because they confronted them about something.

"There's definitely that hope you can instill by exposing them to that conflict and issues."

Mafae added, "When someone goes through something as a child and they have trauma, they'll bring it up until they're an adult.

"But when you were already able to fix it when they're young, then their mind is free from that."

Jackie is a mother to five children.

Andre and Kobe are her sons with former husband Benjie Paras.

Jared is her son from a former relationship, while Caleigh and Yohan are her children with current husband Michel Franken.