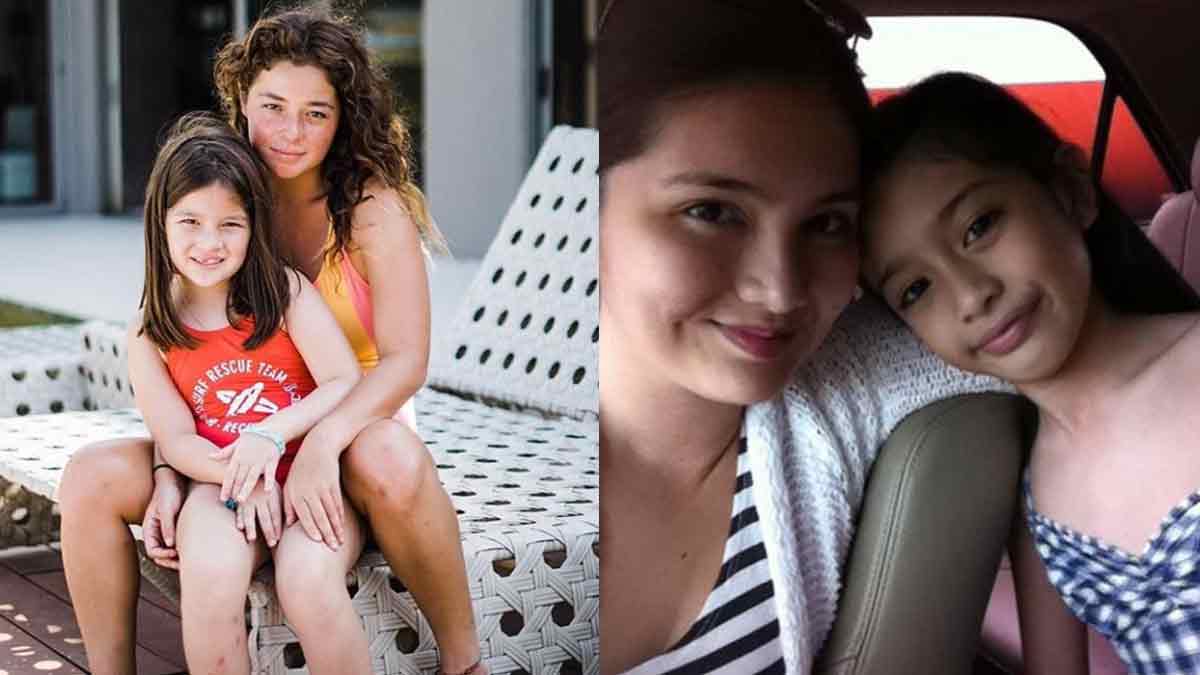 Andi Eigenmann (L) and Dimples Romana (R) share similar journeys as mothers. They both had their first child, Ellie and Callie respectively, at a young age. Andi was 21 and Dimples was 19.
PHOTO/S: @andieigengurl / @dimplesromana on Instagram

Andi Eigenmann and Dimples Romana both became mothers at a young age.

The two actresses, who last shared the screen together in The Greatest Love, revisited their motherhood journey on Dimples' Facebook and YouTube livestream show last August 12, 2020.

Dimples was 19 when she and husband Boyet Ahmee began a family.

The Kapamilya star recalled how people had unwelcome opinions about starting a family at a young age.

Andi was already 21 when she had Ellie, her daughter with former boyfriend Jake Ejercito. Despite being of age, she said, "People thought I was 16, for some reason! So all the more I got those words from those people."

It didn't help that Andi had yet to develop a strong sense of self.

She continued, "Because I didn't really even know who I was at that time... Parang kapag may nagsasalitang tao, 'Ay ganyan ba ako? Ah, oo, ganyan nga ako.'"

Dimples could relate to this feeling, too, as she affirmed, "Because you didn’t know yourself, and you weren’t as sure yet with yourself before, mas madali ka maapektuhan."

She then advised viewers, "Always make sure you get to know yourself first.

Seeing Andi grow as a mother

Andi and Dimples first worked together in Agua Bendita, an ABS-CBN prime-time series that premiered in 2010.

The two of them reunited on The Greatest Love in 2016, another Kapamilya series that became a hit on the afternoon block.

It was there that Dimples got to know Andi as a caring mother to daughter Ellie.

Dimples remarked, "Alam mo, naalala ko, hindi tayo mapayagan na aalis ka kasi malayo tayo and you were literally crying because you wanted to be there for Ellie."

Andi remembered that moment, too.

"Pero I guess that goes to show how big of a deal it is to me to be the kind of mother I want to be.

"Hindi kasalanan ng showbiz… it's just that I wanted different things for myself and for my kid.

Dimples reassured her, "And that was okay, Ands. Remember when I was talking to you na I know that we get a lot of expectations for us coming from different people.

"But it is very important that we recognize the kind of happiness that really is true to us, iyong para sa atin talaga.

"And we respect that. Kumbaga, I think, pinakanatutunan ko talaga is to respect one another's choices in life.

Andi stepped away from showbiz in 2017 to focus on her kids Ellie and Lilo.

She and Philmar are presently building a family in Siargao.

As for Dimples, the actress and her husband Boyet recently celebrated their 17th wedding anniversary.

Dimples and Boyet have two kids: Callie and Alonzo.