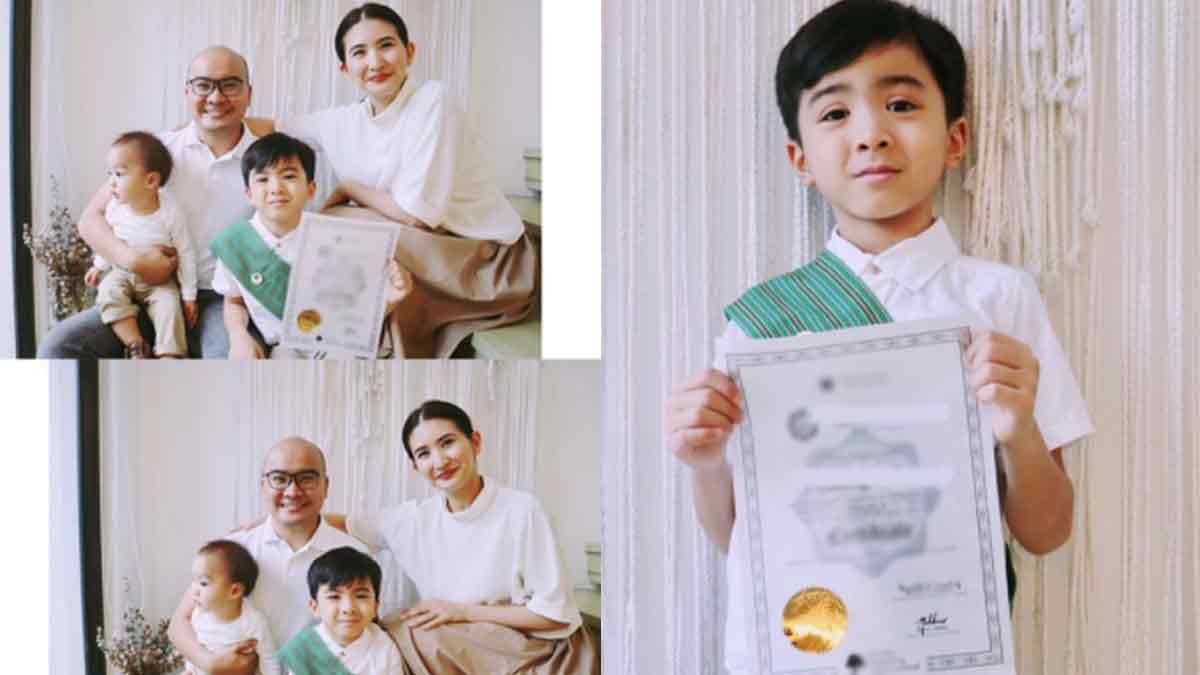 Rica Peralejo and her husband Joseph Bonifacio celebrate the graduation ceremony of their first son Philip. The occasion made Rica extra emotional as she realizes how fast her firstborn is growing up. Also in the photo, Rica's second son Manu.
PHOTO/S: @ricaperalejo on Instagram

Rica Peralejo has discovered a hard truth about motherhood.

The incident that sparked the celebrity mom's musings?

Her six-year-old son Philip graduated from Kindergarten on October 21, 2020.

The ceremony was supposed to be done earlier, but it was postponed by a few months because of the COVID-19 pandemic.

When it finally happened, Rica was struck with a realization as she saw her son wear his graduation sash and hold up his certificate.

The former actress narrated in her Instagram post (published as is): "Now as I was transferring photos from camera to phone and sending them to our provider, I couldn't help but write this.

"'How can you be grade one now and how can you be seven in three months? All the numbers are going up, yours and mine, but all that means is that there is less time.

"'From the moment you were born, it was always about letting you go. My only prayer is that you'd still like to meet me for deeps and sillies even when you have no longer any need from me.

"'By that point, it is I who will need more from you and I hope you will always understand that though we never own you, we will always, always, want to be with you.

"'You are my firstborn and equal, a son and a good friend. Love you, Philip. You are so precious to me.'"

Rica acknowledged that Philip's graduation was a "simple ritual, a simple requirement," but the occasion brought up all these emotions.

She continued, "Moms have to manage many silent cries. And we often have to quickly wipe the tears away as we get up and tend to need after need, lest they see and ask why. For how can we tell them it is because [of] you?

"You are the reason behind these salty drops streaking my harried face. Tears of joy mostly, yes, but also some of sadness, some kind of advanced grief or mourning for those days when things would no longer be the same.

"When I am safe from stepping on Legos and the books are always arranged, with nothing much to do but gather dust."