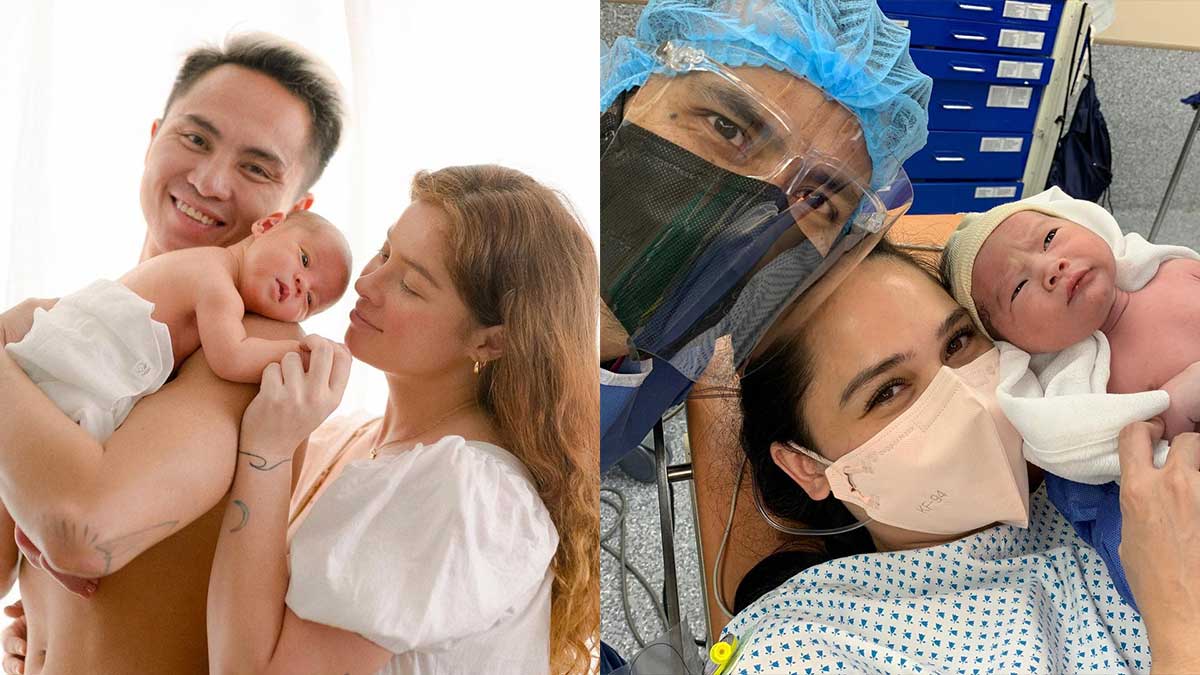 Babies bring joy to every household and give hope for better days to come during this unprecedented time of the pandemic. Fans are especially delighted to see the newborn babies of their favorite showbiz celebrities.

At the height of the quarantine in 2020, stars like Anne Curtis, Coleen Garcia, Iya Villania, and Max Collins were blessed with their little bursts of sunshine.

The couple got married in December 2016, and announced in May 2020 that they are expecting their first child together.

The first-time mom said in her Instagram post, "Life truly is a miracle and a gift from God, with Him nothing is impossible."

Koa, a little island boy was born on the 17th of January 2021. He is the third child of Andi Eigenmann.

Veteran actress Jaclyn Jose, Andi's mother, shared the news on Instagram. She wrote, "Congratulations anak for having a successful birth to our newest addition of the family."

Andi’s soon-to-be husband Philmar Alipayo, who has a son from a previous relationship, is happy to have another boy in the family.

Koa’s big sisters Ellie and Lilo were all smiles, too.

"What a magnificent blessing on the 21st day of the 21st year of the 21st century," she posted on Instagram after giving birth.

Iwa had revealed that her pregnancy with Caleb Jiro or CJ wasn’t easy, but it was all worth it.

In an Instagram Story, Barbara thanked the Lord and her partner Romnick for being there and helping her during her pregnancy journey. She also went through a 24-hour labor.

They have not revealed their baby’s gender. 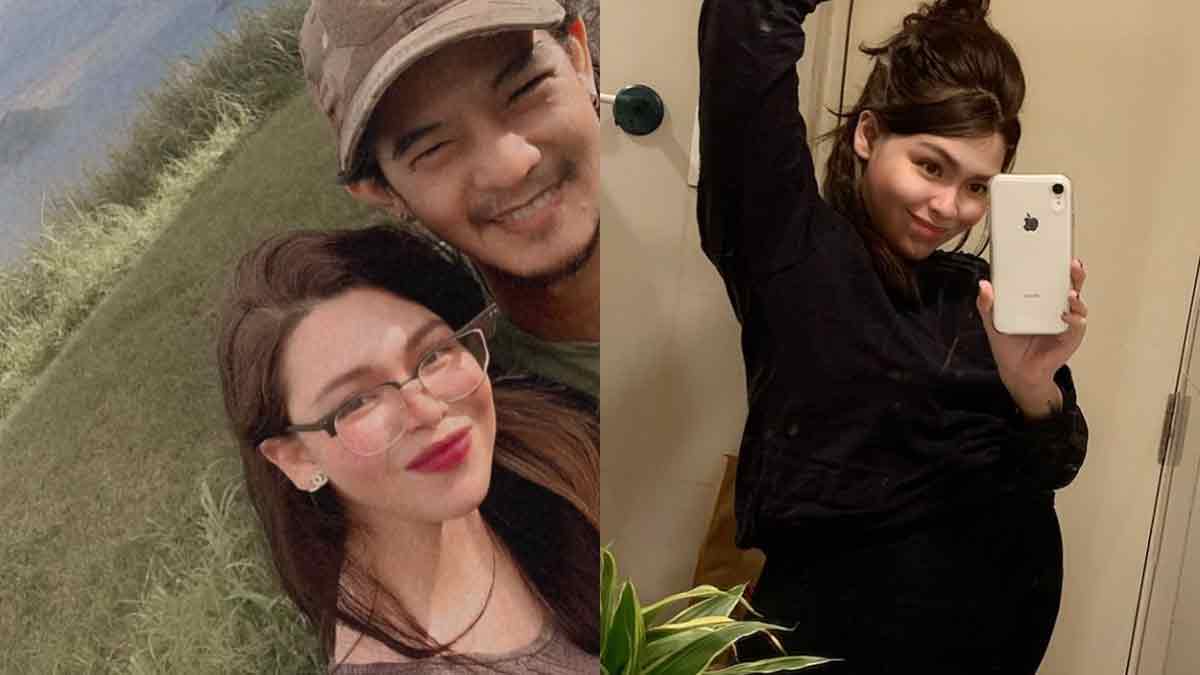 Liz took to Instagram with a series of photos that showed her newborn gripping the hand of his daddy.

In December 2020, she announced her second pregnancy with a low-key confession that she and Raymond already tied the knot.

The couple's eldest son is Xavi.

Weighing 9.2 pounds at birth, baby Avianna was one of the biggest babies in the hospital that day.

Vin and Sophie have been together for eight years and got engaged in December 2020.

She also posted on Instagram that her journey was nothing like what she expected. "It was a whirlwind of emotions, but we eventually did it. She’s finally here—healthy and safe."

This was her first-ever operation, she said in her birthing video.

She and her husband Martin Spies named their baby boy Lukas Judah, which means “bringer of light” and “praised.”

Months after giving birth, she is now back to doing Les Miserables shows.

In an Instagram post, Rachelle Ann admitted to being initially overwhelmed by the thought of juggling career and motherhood.

She added, "But praise God we did it! Always do it scared right?! It all worked out :)"

Actor and dancer Jhong Hilario and his partner Maia Azores had their first baby Sarina Oceania on March 27, 2021.

On November 26, 2020, the couple announced the pregnancy in an Instagram post. They showed Maia's baby bump with the caption “Thank you Lord!”

On April 5, 2021, Georgina Wilson and her husband Arthur Burnand welcomed their third child and only daughter, Baby Charlotte.

They revealed the pregnancy in December 2020.

After a while, Skusta heard Baby Bia’s cry for the first time and exclaimed, "Biglang tumigil ang mundo.”

Bia is a nickname short for Zebbiana, which is inspired by the 2019 song of daddy Skusta “Zebbiana” dedicated to partner Zeinab.

Baby Ariana is the second daughter of SexBomb dancer Jopay Paguia and Maneaouvres dancer Joshua Zamora. She was born on May 2, 2021.

In February, Jopay and Joshua announced through a vlog that they are going to be parents again.

They welcomed their eldest child, Isabelle Allesa, in 2017. Big sister Allesa could not hide her excitement upon seeing her younger sister for the first time.

On May 22, 2021, actress-singer Roxanne Barcelo gave birth to her first baby boy she calls ‘dababycinco’.

She announced her pregnancy in a YouTube vlog on January 21, 2021, saying that it was their "most beautiful plan."

Roxanne is very discreet about details of her new life with her husband, whom she recently introduced to her fans and followers.

They got engaged and married in 2020.

Baby Dreighton is the baby #2 of Kapuso actor Dion Ignacio and wife Aileen. They welcomed their son together with new ate Dylanne Jailee on June 27, 2021.

Dion revealed his wife’s pregnancy during a guesting on Mars Pa More.

Joyce penned a heartfelt message for her first child, saying, "I love you, my son. Thank you for making Mama and Dada the happiest and proudest parents.”

During their first anniversary on February 9, 2021, the couple revealed that they are 19 weeks pregnant.

The couple’s love story started on the set of Unang Hirit, where they were segment hosts.

After three daughters, finally, it’s a son for Patrick Garcia and wife Nikka! Their baby boy is named Enrique Pablo.

They first announced on January 8 that their prayers for a baby boy had been answered.

Oyo was praying for a girl, but when baby Isaac’s gender was revealed, he jokingly posted, “So paano na Lord? Ibig ba sabihin may kasunod pa ito?”

Ynez Veneracion became a mom again at the age of 40 after giving birth to her little princess Jianna Kyler. She delivered the baby via Caesarean section on August 3, 2021 at St. Luke's Medical Center.

After almost a decade, she is very happy to be a mom again.

Katarina Rodriguez, 29, is a first-time mom.

Baby Robert Joaquin was born on August 25, 2021 via water-birth delivery.

Katarina shared in an Instagram post that, “Power to overcome pain that feels like death but in turn births life,” is the essence of a woman.

On September 1, 2021, Anthony proudly shared on his Instagram account that Sam has finally given birth to their little ray of sunshine. He wrote, "I’m officially a Dad!”

The couple got engaged in November 2019 and got married on March 8 this year.

They celebrated their 5th wedding anniversary this December 9.

Their eldest son is Pio Joaquin, who is now three years old.

After nine months of being together with his girlfriend Chin Kee, Neil Coleta became a dad to daughter, Jazmin Chinnei Marie.

Arvin Tolentino of PBA's Barangay Ginebra and wife Brandy Kramer are now first-time parents to baby Olivia, who was born on September 18, 2021.

In April, they announced that they are expecting a baby.

Brandy is the sister of PBA star Doug Kramer.

Baby girl Marta was born on September 18, 2021, and she is the "missing piece" of their family, according to her mom’s Instagram post which bore the hashtag #FiveAndDone.

Sitti proudly revealed on Instagram that her baby girl with husband Joey Ramirez got a 9.9 APGAR score.

The 27-year-old ex-beauty queen shared the happy news by posting on Instagram photos from her maternity shoot.

Alaiza also put out a baby-bump photo the day before she gave birth, and later shared a photo of two-week-old baby Noah.

She announced her pregnancy through a vlog posted on her YouTube channel.

The couple tied the knot in December 2020.

Husband Boom Labrusca said in his Instagram post, "To my wife, for carrying our baby, for being strong and for being an amazing wife... Good job mommy.”

It was in May when Desiree announced her first pregnancy. They got married in the United States in 2018.

Boom is also the father of actor, Tony Labrusca.

Actress Anna Luna is now a mother. She gave birth to her first child, Anne Clarke, on October 7, 2021.

The simple yet beautiful name for their baby girl was derived from her and husband Clark Alpuerto's names.

It’s another boy for Neri and Chito Miranda!

They named their second son Manuel Alfonso, and gave him the nickname Cash.

The Parokya Ni Edgar frontman announced the happy news on October 8, 2021, but did not give any details about the birthing journey of wife Neri.

They announced the pregnancy in May 2021.

Divine Lee is now a mother of three! She gave birth to baby girl Dali on October 10, 2021 via Caesarean section at Chong Hua Hospital in Cebu.

She and husband Blake Go announced the pregnancy on March 21, 2021.

They confirmed their pregnancy in April 2021.

Riva delivered baby Athena via Caesarean section on October 12, 2021. They shared details of their birthing experience in a vlog on YouTube.

The couple, who have been to gether for two years, announced the pregnancy on May 30, 2021.

Last June 1, they revealed that Rachel is bearing a child. A month later, they confirmed they had already gotten married.

"Everyday is a struggle but it's more of a blessing," Nadine wrote on Instagram before giving birth.

Meanwhile, daddy Richard Chua says Baby Harmony is a “great equalizer and referee” to her older siblings Heather and Titus.