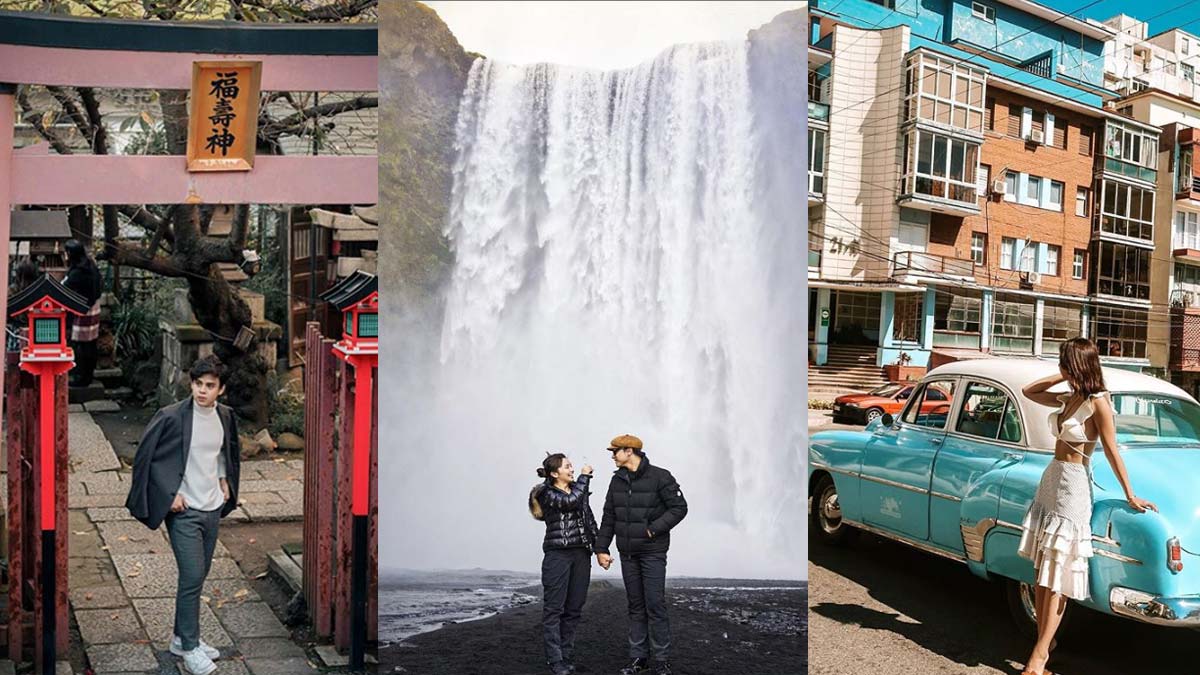 Japan, Iceland, and Cuba are among the popular travel destinations for celebrities. Where do you plan to travel to this 2020?
PHOTO/S: @khalilramos / @bernardokath / @juliabarretto on Instagram

The year 2020 promises another set of adventures and getaways for avid travelers.

Still thinking of where to go this year?

Here's a list of dream destinations inspired by the travels of our favorite celebrities:

Early in 2019, ABS-CBN actress Julia Barretto introduced us to the vibrant island paradise of Tulum, Mexico.

According to Lonely Planet, Tulum is one of Mexico's top beach destinations.

The well-preserved Mayan ruins are also a top draw for tourists.

Cuba also became a popular travel destination for celebrities in 2019.

After visiting Mexico, Julia flew to the Caribbean island and explored its capital city, Havana.

The 500-year-old city has a rich cultural history. As the official tourism website of Havana, Cuba describes: "Life in La Havana passes by surrounded by music, tradition, culture, national monuments and natural attractions of immeasurable value."

Iceland is famous for its dramatic, otherworldly landscapes, making this country a dream destination for nature lovers.

On its official tourism website, the Nordic island is described as a "country of sharp contrasts. A place where fire and ice co-exist."

The globe-trotting couple hiked the mountain ridges of Iceland.

This included a photo underneath the famous Northern Lights.

Bali, Indonesia has become a go-to destination for celebrities who crave for a tropical escape overseas.

A number of celebrity couples have been spotted in the island paradise.

Enrique Gil celebrated his birthday in Bali with girlfriend Liza Soberano and their squad in March.

Sarah Geronimo and Matteo Guidicelli also reportedly celebrated their sixth anniversary in Bali, after being spotted by eagle-eyed fans at the airport in September 2019.

Japan has always been a favorite destination among travelers. All year round, the Land of the Rising Sun has something interesting to offer.

At the start of the year, a number of celebrities experienced winter at the town of Niseko, a popular ski destination located in the Hokkaido prefecture.

Celebrities such as Maja Salvador and Lea Salonga recently spent their holiday break there.

Springtime in Japan was also a popular season in 2019, as celebrities flocked to the country in April to see the cherry blossoms in full bloom.

Pauleen Luna, Vic Sotto, and their daughter Tali had their first cherry blossom experience as a family last year.

Tokyo and Osaka were popular destinations in October, as these major cities held Halloween street parties with locals and foreigners gamely dressing up for the occasion.

A number of celebrities flew to Japan for Halloween in 2019.

This year, Japan expects a major increase of visitors as they prepare for the 2020 Tokyo Summer Olympics in July.