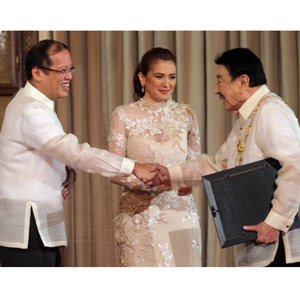 Dolphy (right) is the second person to receive the highest rank of the Order of the Golden Heart. President Noynoy Aquino (left) honored the King of Comedy with the Marangal na Kuwintasearlier today, November 8, at Malacañang Palace. Zsa Zsa Padilla (middle) accompanied her lifetime partner during the ceremony.

Veteran actor-comedian Dolphy received earlier today, November 8, the highest rank of the Order of the Golden Heart during simple rites at the Malacañang Palace. He was accompanied by his lifetime partner Zsa Zsa Padilla.

President Benigno S. Aquino III bestowed the highest rank, called the Grand Collar (Marangal na Kuwintas), on Dolphy because "his comedy has brought joy to millions but just as importantly, his well-known philanthropy and encouragement of charitable and good causes as well."

Aside from his many contributions to the entertainment industry, the 82-year-old King of Comedy is recognized for giving scholarships to deserving children of Overseas Filipino Workers through the Dolphy Aid Para sa Pinoy Foundation.

The Order of the Golden Heart was established in 1954 by the late President Ramon Magsaysay to recognize "those who have rendered distinguished services or given noteworthy monetary or other material aid, encouragement to the campaign for the amelioration and improvement of the moral, social, and economic conditions of the Filipino masses, and for volunteerism in the service of the Filipino masses."

President Magsaysay first conferred this rank on the blind American author and humanitarian Helen Keller on May 20, 1955.

Wearing an all-white ensemble and a white fedora, Dolphy sang "(I Wonder Why) You're Just In Love" and "Handog." These songs are included in his album, which is released under PolyEast Records.

When ASAP XV hosts Karylle and Gary Valenciano interviewed the King of Comedy after his production number, he expressed his gratitude to the ABS-CBN executives who continue to support his endeavors.

HAIL THE KING. Born Rodolfo Vera Quizon, the comedian started out his career by using the stage name Golay while performing on vaudeville during the Japanese occupation.


His first movie was Sa Isang Sulyap Mo Tita under Sampaguita Pictures in 1953. He then became known for portraying gay roles in comedy films such as Jack en Jill and Facifica Falayfay.


He left an indelible mark on television for his role as John Puruntong in John en Marsha. He worked with the late Nida Blanca and then-child star Maricel Soriano in the popular '80s sitcom that aired for 17 years.

To younger viewers, he is known as Kevin Cosme in ABS-CBN's defunct sitcom, Home Along Da Riles.

Dolphy's achievements have been recognized by several award-giving organizations.

The Manunuri ng Pelikulang Pilipino honored Dolphy with a Lifetime Achievement Award at Gawad Urian in 1994.

The following year, the Philippine Movie Press Club conferred the same honor to him during the Star Awards for TV.

In 1999, the Cultural Center of the Philippines chose Dolphy as one of the "100 Influential Filipino Artists of the Century."

Last year, Dolphy was honored with a Lifetime Achievement award during the 35th edition of the Metro Manila Film Festival.

The patriarch of the Quizon clan has been honored not only here in the Philippines but also abroad. In 2001, Dolphy and his sons Eric and Jeffrey "Epy" Quizon tied for the Prix de la Meilleure Interpretation in Brussels, Belgium. They earned the said award, which is the top acting plum, for playing Walterina Markova in the movie Markova: Comfort Gay.