Miko Palanca admits he has not said 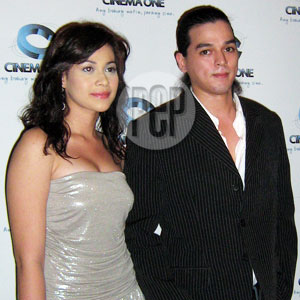 Miko Palanca admits that he and Bea Alonzo are exclusively dating. He has not said "I love you" to her though. Miko explains, "We gotta be sure about the way we feel."

It Might Be You. It's been three years since speculation on the Miko and Bea romance brew. It started on the set of their soap It Might Be You---the series which top-billed the Bea Alonzo and John Lloyd Cruz love team. Miko played Bea's childhood friend and John Lloyd's rival.

"We were working together, tapos even after when our show ended, we would still keep in touch," recounts Miko. "We never labeled whatever it is we have now. We're more than friends. We're dating, but it just started happening more and more these past couple of months. We've been seeing each other a lot more."

Both private people, Miko and Bea recently admitted to the public that they are indeed exclusively dating.

"I've always been a private person kasi e," says the actor. "But you know, I just felt na there's no point in hiding anything because we're both very happy."

Beautiful Bea. When asked to describe Bea, Miko lists down her good qualities. The quiet actor is obviously smitten.

"She's a very sweet girl," he starts. "She takes care of the people around her. She's obviously very beautiful. She's got qualities that I look for in a girl---simple, down to earth. All these things that I look for, nakikita ko sa kanya."

Marriage? While Miko's brother, Bernard Palanca, chose to tie the knot with Meryll Soriano a few months into the relationship, Miko says he is not going down that road any time soon.

"No, no, no, no, no, no, no," exclaims Miko. "I'll tell you right now that's far from what we're [Bea and I are] thinking. It never ever crossed our minds. Basta like I said, we're enjoying now. I'm enjoying her company. She's enjoying my company. We want to leave it as that. Kaya hindi namin ni-le-label, kaya hindi namin pinag-uusapan...Basta't masaya kami. From here, eventually if things get better, then good, 'di ba?"

But is Bea wife material?

"I don't know what to say," he smiles. "If you think about it, it is kinda early to say that. I'd like to think that kung talagang umabot sa seryosohan, then sana ito na nga ang huli ko."

P.S. I love you. Some might be surprised but Miko has not said the three magic words to Bea.

"The feeling is definitely there," Miko says simply. "If I say that word, I want her to be the first one to hear it from me. But I definitely care about her a whole lot. I don't know...like I said, things are doing nice now. I don't know...maybe I'll say that tomorrow. Maybe tonight if I see her. I don't know. Bahala na when that moment's there.

"I don't wanna take it for granted. And I don't want na sabihin ko lang ‘yon, tapos biglang ano...We gotta be sure about the way we feel," Miko adds.