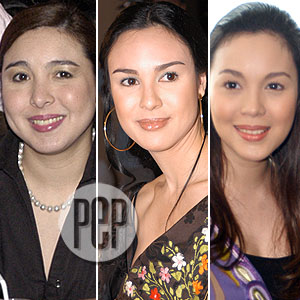 "Claudine (right) will always be my baby sister, thru the not so good and good times... I will remember only her good and loving ways. I shall put behind me the past. That goes for Marjorie (left) as well. Life's too short to put to waste," says Gretchen Barretto.


It's final, the Barretto sisters Gretchen and Claudine have reconciled!

An accidental meeting at S & R in The Fort, in Taguig City, paved the way for the sisters to finally end their three-year rift.

Claudine, who is now sixth months pregnant with her first child with husband Raymart Santiago, broke the news of her reconciliation with Gretchen. In an interview with GMA-7 News yesterday, April 10, Claudine confirmed a report that she and her eldest sister have kissed and made up. She, however, refused to give further details "kasi siguro matagal naming hinintay ito. Mas maganda yung sa amin na lang muna 'to."

She added, "It was a very emotional and it was a very, very good meeting."

Since Claudine has given her side of the story, PEP (Philippine Entertainment Portal) asked Gretchen today, April 11, for a comment about her reconciliation with Claudine.

Through PEP and YES! editor-in-chief Jo-Ann Maglipon, Gretchen replied with this text message: "Yes, it's true that all is well. Claud will always be my baby sister, thru the not so good and good times. I will remember only her good and loving ways. I shall put behind me the past. That goes for Marjorie as well. Life's too short to put to waste."

It will be recalled that the feud among the Barretto sisters—Gretchen, Marjorie, and Claudine, who are all movie stars—erupted in June 2004. The gap reportedly started with Gretchen and Dennis Padilla—who is married to another Barretto sister, Marjorie—falling into a heated argument about ABC-5 hiring Willie Revillame as host for its noontime show. ABC-5 is owned by Tonyboy Cojuangco, Gretchen's partner.

Dennis Padilla was formerly Willie's co-host at ABS-CBN's defunct noontime show Masayang Tanghali Bayan. The general belief is that the show was cancelled because of Willie, who tended to agitate both the censors and the public with language and jokes inappropriate for noontime television viewing. Dennis, who relied on the show for his regular income, is believed to have blamed Willie for his sudden change of fortune.

Unfortunately, the private war turned very public after other members of the family took sides in the fight. Claudine gave interviews defending her brother-in-law Dennis and sister Marjorie, and chastising sister Gretchen. Inday Barretto, their mother, appeared in a television entertainment program castigating Gretchen. Very upset, Gretchen's partner, Tonyboy Cojuangco, had his lawyers draw up papers asking Marjorie and Dennis to leave the Loyola Grand Villas house that Gretchen had given them to use. Since then, the family feud escalated. By June this year, it would have counted three long years.

Last August 2005, the public thought the tide would change. Claudine, the youngest Barretto child, hinted to the press that she and her sister Gretchen were okay, that they had ironed out their differences over the phone one day in January that year, and that she had in fact invited Gretchen to her wedding.

But when Claudine got married to Raymart Santiago on March 27, 2006, Gretchen was not in attendance.

During the seventh anniversary of YES! and grand launch of PEP last February 28, 2007, Gretchen, a YES! cover girl, was present. When asked how she would react if Claudine suddenly showed up at the party, she kept mum. Her close friend Ruffa Gutierrez, answering for her, said: "Yung mga ganung bagay, dapat huwag pilitin. If it happens, it happens. At saka mas maganda kung magbabati sila in private, na sila lang dalawa ang mag-uusap at hindi sa isang showbiz event na gaya nito."

Less than a month after Claudine's interview, her wish has finally come true.