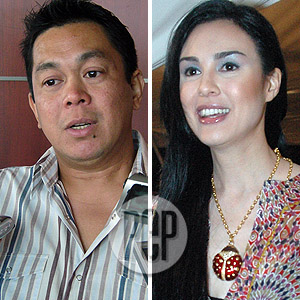 The feuding sisters—Gretchen and Claudine—bumped into each other at S&R, The Fort, last week. Claudine said that Gretchen saw her while she was grocery shopping. The two hugged and cried. No words were spoken. The sisters parted ways after their emotional encounter.

The eyes of the comedian-turned-politician started to well up.

REPORTED HISTORY. Gretchen and her family, the Barrettos, have been feuding since 2004.

The falling out started when ABC-5, owned by Gretchen's partner Tonyboy Cojuangco, hired Willie Revillame to host the show Puso o Pera?. It was said that Dennis, Willie's former co-host in Masayang Tanghali Bayan (MTB) on ABS-CBN and husband of Marjorie, had a heated conversation with Gretchen. Dennis questioned Gretchen why the station hired Willie.

According to reports, Dennis blamed Willie for the cancellation of MTB, which left him out of job.

MARJORIE AND GRETCHEN. Dennis said that Marjorie doesn't know anything about his apology to Gretchen.

He added, "She [Marjorie] has a feeling of her own. You know Marjorie is a very strong-willed woman. Marjorie is very intelligent, and she has her own feelings...I don't know.

"She's tired right now. She's physically tired because of the campaign. The house-to-house daily, the political rallies, the people she has to talk to—this is a new world for Marjorie so I'm sure she's so tired. Hindi ko alam..." said Dennis about his wife, who is running for councilor in Caloocan City.

When asked about the reaction of Marjorie to Claudine's and Gretchen's chance meeting, Dennis said he thinks Marjorie will understand the situation.

MESSAGE TO GRETCHEN. Looking dazed, Dennis managed to give a message to his estranged sister-in-law.