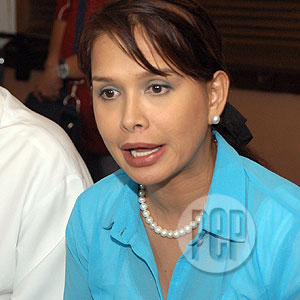 "I know very well that God has sent me my two children for a purpose. When I had Mazeen, I strived to have an attitude of patience, yung perseverance. Kasi there is nothing impossible to God, for as long as my faith is strong, and I'm helping my two sons with the assistance of my husband," says Melanie Marquez about her sons Mazeen and Adam (inset), who were diagnosed with mental-development problems.


A mother's worst fear: To have not one, but two, children with mental-development problems. Showbiz Central interviewed Melanie Marquez yesterday, May 6, and found out what it was like to have this kind of responsibility.

Six years ago, Melanie noted that her second son, Mazeen, had autistic tendencies. But it was only when Mazeen had turned 17 that Melanie learned for sure that here son was, indeed, autistic. She found out too late, so Mazeen had to quit school and undergo special training.

Soon after, Melanie had another child, her fifth, this time with current husband Adam Lawyer. Like the father, the child was named Adam. Baby Adam was normal and healthy and it never crossed Melanie's mind that what happened to Mazeen could also happen to Adam. Recently, the couple noticed that whenever they spoke to Adam, his responses were slow in coming. Aside from that, it takes Adam a bit of time to think before he can speak. The couple visited the doctor, and the doctor told them that Adam had "delay syndrome."

"How did you find out na another one of your sons has mental development problems?" Pia asked.

"At least now I have my husband who can help me out, " Melanie said. "Siya actually ang naka-recognize noon when he [Adam] was six months old. Ang tendency kasi ng baby, when you talk to them, they look at you straight in the eyes. This time, my son was mailap.

"Mazeen is doing well," Melanie replied. "It's just that, of course, he's 17. So, he has his own mood. He doesn't want to verbally communicate with you. Tahimik siya and he wants to move a lot. He's also very familiar sa domestic chores. He only communicates also when he wants to eat."

"What does it feel like to be a mother of two kids who have these mental problems?" Pia asked.

"It's actually a big challenge to me," Melanie said. "I know very well that God has sent me my two children for a purpose. When I had Mazeen, I strived to have an attitude of patience, yung perseverance. Kasi there is nothing impossible to God, for as long as my faith is strong, and I'm helping my two sons with the assistance of my husband. At least nakita namin ang changes ni Mazeen, na kapag kinakausap namin, he's really trying to communicate back. Si Adam naman, I'm just so thankful na may sumunod kaagad na bunso [Abraham]."

"What would your advice be to mothers out there who are having the same difficulties with their own children?" Pia asked.

Melanie has six children from her four marriages: Miguelito, 24, from Senator Lito Lapid; Mazen, 17, from an Arab businessman; Michelle Sarah, 11, and Maxene Xuxa, 14, from Derek Dee; Adam, 4, and Abraham, 2, from her present husband, Adam Lawyer.