Marjorie Barretto: "Dennis is courting me again like crazy." 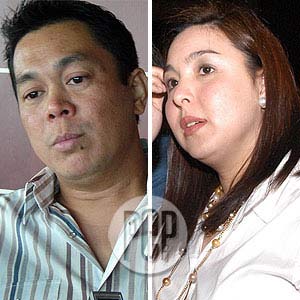 "Dennis is gonna be very much part of my family gatherings, like on Christmas, on New Year's, on Valentine's, on my birthday, for as long as we're friends," says Marjorie Barretto about her husband Dennis Padilla.

The couple announced that they are undergoing a trial separation, in an interview with entertainment columnist Ricky Lo on May 25. Dennis and Marjorie were mum about the reason. It was only said that Marjorie wanted "space."

The two will be celebrating their tenth wedding anniversary in November. Marjorie has three kids with Dennis—Julia, 10, Claudia, 7, and Leon, 2—and a child with Kier Legaspi—Daniella, 13.

SHE SAID. "It's not as bad as people perceive it [the separation] to be. Dennis and I are very much on the phone. He calls me up. I call him up anytime. We're calling it a trial separation. It's not the end of our world," explained Marjorie.

She added, "Dennis is courting me again like crazy. I'd have to control him. He's overdoing it. I mean, I receive roses like every day. Parang funeraria na ‘yong bahay ko. He's trying to win me back."

"There is no third party. Actually, the black propaganda is not for me. It was for Mayor Echeverri, I think. But they did not succeed... The Mayor doesn't know anything about this. Let's give him naman the respect that's due him. He is the mayor, I think he deserves respect," Marjorie noted.

"I only met him two months ago! Give me a break!" she stressed. "Whatever I said, ganoon lang ‘yon, okay? Kung gusto ninyong manganak pa nang manganak pa ang kuwento, it's up to the people. But hindi mangyayari na magsisiraan kaming mag-asawa."

Marjorie also said that her husband, formerly a Caloocan City councilor, will be helping her in her new job.

She teased, "Until he finds another one... Until I find another one, that's the problem of Dennis... I have four kids! My goodness! Sino naman may gusto ng buy one take four?"

HE SAID. In a separate interview with The Buzz, Dennis confirmed that he and his wife are trying to work things out.

Dennis warned their political opponents against spreading rumors about his family.