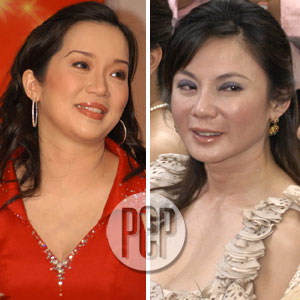 "She texted me a week ago. A very nice text telling me that she was gonna sign up with Facial Care. I really think it's wonderful that she's respectful enough to be able to tell me. Wherever she's happy, I'm happy too," said Dr. Vicki Belo about news that Kris has sealed the deal with Facial Care Centre.

On June 4, 2007, PEP (Philippine Entertainment Portal) posted a story about Kris Aquino accepting an endorsement offer from Facial Care Centre, competitor to the Belo Medical Group, which Kris had until recently been endorsing for years.

The contract-signing took place last May 31 at the Sofitel Philippine Plaza Hotel on Roxas Boulevard. It was a closed-door meeting between Kris, her business manager Boy Abunda, and Facial Care Centre representatives. There were no outsiders or media present.

THE REACTIONS. The news instantly drew queries from kibitzers—what happened to Kris's deal with Dr. Vicki Belo? Does Dr. Vicki know? Did their personal issues affect their business decisions?

That same day, PEP got hold of Dr. Vicki Belo, proprietor of the Belo Medical Group. The doctor became unexpectedly emotional when she relayed her text exchange with Kris.

"She texted me a week ago. A very nice text telling me that she was gonna sign up with Facial Care. I really think it's wonderful that she's respectful enough to be able to tell me. Wherever she's happy, I'm happy too," said Dr. Vicki.

From the looks of it, two former close friends are still civil towards each other.

And then came one more valid query, did the famous host-TV actress violate the non-compete clause? There's no law restricting endorsers to shift from one company to another, even if the latter is the direct competitor of the former.

Take the case of the celebrities who were originally associated with a particular brand, then later endorsed the competitor's brand. There's Lucy Torres who first became a Lux shampoo girl in 1993, then she appeared on a Pantene TV commercial twelve years later. There's Sharon Cuneta who endorsed Selecta Ice Cream in 1998, then she came out on the TV ad of Nestle Ice Cream early this year.

It's okay to hop from one company to another, but the point is, the transfer has to happen after a certain period of time.

THE RULES. To shed some light on this matter, PEP got in touch with Grace Honrado, Ad Board's ACRC (Advertising Content Regulation Committee) coordinator. We asked three questions: (1) Is there an existing rule or guideline that tackles the "non-compete" clause for endorsers? (2) Is the transfer of Kris Aquino from one beauty specialist to another considered a violation? (3) Has someone complained about it?

For the first question, Grace answered that the board's task is to regulate ad content. Section 7, Number 7 of the Advertising Code of Ethics states that "Advertisements shall not feature talent/models who have been prominently associated with a directly competitive advertisement, within a period of three (3) years from the last airing or publication of the competitive broadcast/print advertisement."

Grace said she has yet to see the material before she can arrive at any conclusion. "It's difficult to comment kasi wala pang nire-refer na material ang Facial Care."

THE COMPETITOR. From Facial Care Center's end, NJ Torres—who is in charge of the clinic's public relations—said: "The contract signing was done legally, with the presence of attorneys. I don't think may makakalagpas."

She noted on the day of the signing: "We would like to stress that Kris will be endorsing a facial treatment and not anything for the body. The beauty procedure uses laser to tighten her skin which bloated during her recent pregnancy."

When asked why they chose Kris, "We've been trying to get her. Our endorsers are mostly not so active on TV. Si Kris dati, nasa list of untouchables. Kaya nung time na lumabas yung PR na she's not going anymore to Belo, talagang niligawan na namin. We heard other clients are making ligaw."

THE REAL DEAL? Dr. Vicki stressed in the interview that she and Kris have been friends for thirteen years. Which is why, she said, more than losing Kris as Belo Medical Clinic's endorser, it's the thought of losing a friend that's difficult for her.

"You can find many endorsers, but you cannot find many good friends. Friendship is more important than endorsing [my clinic]," she said.

Business is back to normal for Dr. Vicki. Life goes on for Kris. But the sad realization here was posted by "downunder," a PEP user, last June 4: "no permanent friends sa showbiz tlaga."