This Pinay and her boyfriend just heat up Facebook 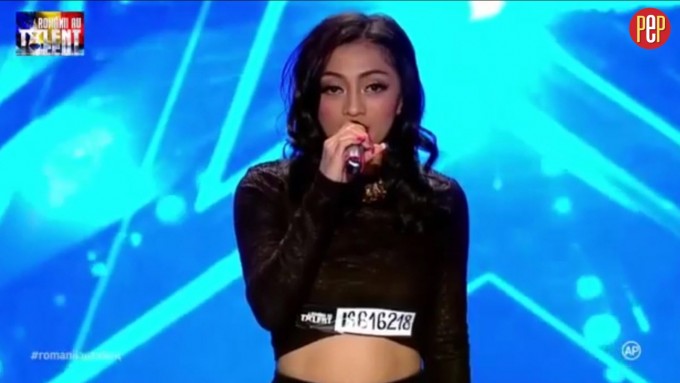 Resciebelle Santiago auditioned and wowed everyone in Romania's Got Talent. Someone else also got noticed.
PHOTO/S: Screenshot from Romanii Au Talent

Resciebelle Santiago is a Filipina entertainer who went on a vacation trip with her boyfriend to Romania to meet his parents.

But upon arriving there, they came across an audition for Romanii Au Talent or Romania's Got Talent.

Resciebelle, now 26, who two years ago placed second in a Taiwanese talent search, was encouraged by her Romanian boyfriend to audition for the show.

Performing Whitney Houston's "I Will Always Love You," the Cavitena wowed the audience and the judges of Romanii Au Talent, which earned her a place in the semi-final round in May.

But more than Resciebelle's impressive performance, Facebook users who got to watch her Romania's Got Talent audition also noticed how good-looking her boyfriend is.

His name is Sorin Dumitras, a Romanian model and reality show participant in Romania's versions of the U.S. shows The Bachellorette and Temptation Island.

Resciebelle and Sorin met in Malaysia where they both work as entertainers.

Although most of comments on Facebook posts of her audition video congratulated Resciebelle for her performance and making it through the audition, some were about her boyfriend Sorin and how hot he is.

In an interview with PEP.ph (Philippine Entertainment Portal), Resciebelle said she's ok with netizens lusting over her BF.

And win or lose, Resciebelle said they are planning to get married in Romania in the near future.

Resciebelle Santiago auditioned and wowed everyone in Romania's Got Talent. Someone else also got noticed.