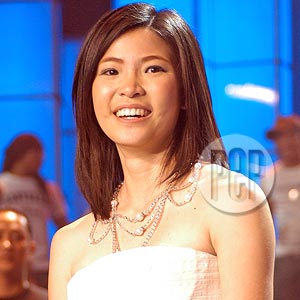 PBB Season 2 Big Winner Bea came out in a giant mirror ball before reuniting with her family. "Follow your dreams, go!" an esctatic Bea exclaimed to the jubilant crowd.

After Wendy was announced as the third placer, she was heard saying "Teka, baka i-boo ako" to the other Big 4. True enough, most of those in Araneta booed her but Wendy was smiling through it all and made a peace sign with her two hands.

When co-host Bianca Gonzales asked Wendy to give a message to her family, the crowd's jeering got louder.

Four months ago, select housemates were introduced to the public as the new tenants of Kuya for the second season of Pinoy Big Brother. They represented a cross-section of Filipinos, including those with mixed parentages.

After 126 days, the remaining four finalists, Gee-Ann, Mickey, Beatriz, and Wendy, bested all the other 16 housemates by garnering the highest number of votes for the period.

Auditing firm SGV and Company tallied the votes, dating back from when Robert Woods II was evicted until the very night of voting, June 30. The firm verified the number of votes coming in until the Big Winner was announced.

The Big Four were brought to the Big Dome in vintage cars.

The theme for the night was "Global Fiesta," according to Maribeth Bichara, the choreographer of the show. For the opening number, she had around 60 dancers filling the stage of the Araneta Coliseum. Professional dancers and former PBB housemates performed a medley of Filipiniana dances and modern numbers that wowed the audience.

Ex-Slovenia Big Brother housemate Tina Somelic, who flew all the way from Slovenia, participated in the grand event by joining in the opening number.

The 18,000-seater Araneta Coliseum was jampacked with supporters of the Big 4. Comedian Chokoleit pleaded with the audience before the start of the program. "Sana walang magkasakitan. Sports tayo lahat," he said.

Comedians Jon Santos, Candy Pangilinan, Giselle Sanchez, and RS Francisco impersonated the Big 4—Jon as Mickey, Candy was Bea, Giselle as Gee-Ann, and RS as Wendy. When RS appeared, he was booed by majority of the people inside the Big Dome reflecting the people's disapproval of Wendy, whom they perceive as a "villain" inside the PBB house.

The PBB 2 housemates performed the finale with the Cebalo band.

Just a sidelight, when Wendy saw her boyfriend Bruce, she rushed to him. Bodie also hugged Gee-Ann upon seeing her.