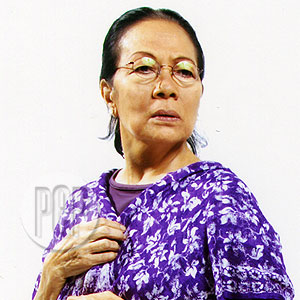 Friends of late actress Nida Blanca are one in expressing shock with the reported suicide of her American husband Rod Strunk.

Speaking to Bayani San Diego of the Philippine Daily Inquirer, veteran actress Caridad Sanchez thinks that with Strunk's suicide the case too has met its demise.

Ms. Sanchez, who is a close friend of Nida and one of those who openly grieved her passing, revealed that she's contemplating a talk with Kaye Torres to finally end the dragging murder case. Kaye is Nida's daughter by a previous marriage and the one attending to all the details of the investigation.

Ms. Sanchez finds it ironic that Strunk's lifeless body was also found in the parking area of the inn where he was staying. The Tracy Police Department in California concluded its investigation by stating that Rod Strunk had leaped to his death from the balcony of the Tracy Inn.

The July 11 incident eerily mirrored Nida's fate when her blood-drenched body was found inside her Nissan Sentra vehicle in November 7, 2001 at the parking lot of the Atlanta Towers in Greenhills, San Juan.

In 2001, the National Bureau of Investigation (NBI) pointed to Strunk as the brains behind the killing, based on the testimony submitted by self-confessed assassin Philip Medel. The suspect later retracted his statement, claiming that he was tortured by the police to claim responsibility for the crime and to point at Strunk as the mastermind.

"Why is that he was also found in a parking lot?" Ms. Sanchez firmly believes that what happened was a case of poetic justice.

"How can we proceed when he is already dead? Tama na ‘yan. That's hatred already. The person involved is already dead. If he really killed Dory (Nida's nickname among her close friends), there is already judgment from God," Ms. Sanchez appeals.

Delia Razon, also a veteran actress and one of Nida's closest friends in the industry, seconded Caridad's view, saying that the debate regarding Nida's death is "finally over."

She hopes though that Strunk had left a suicide note to clear everything and for the entire world to know finally whether he had a hand with the killing.