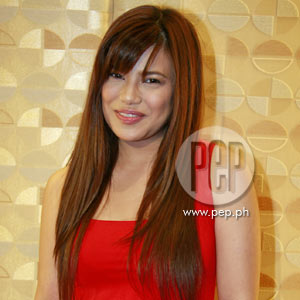 Looks like young actress Denise Laurel will be very busy this year after she signed a contract with Regal Entertainment. As the newest Regal Baby, Denise says, "I'm gonna be doing a lot of singing this year aside from acting. Siyempre, parehas ko yun love, intense passion for the both arts."

Young actress Denise Laurel is now part of the Regal family after she was presented as one of the new Regal Babies during their contract signing yesterday, February 7, at the Imperial Palace Suites in Timog Avenue, Quezon City.

Denise was the only girl among the four members of the newest batch of Regal Babies, which also include Wazzup, Wazzup tadjock Eri Neeman, ramp model Brent Javier, and Carlos Ermita Alvarez, who comes from the well-known Ermita political clan. They are all being managed by Arnold Vegafria.

Denise said that signing a contract with Regal Entertainment would open a lot of doors for her career this year. The 20-year-old actress was thrilled when she described to PEP (Philippine Entertainment Portal) how she felt about becoming a talent of Regal.

"Exciting na exciting kasi, you know, a new chapter na naman of my career. New move, everything bago ang lahat for the New Year, so super duper overwhelmed. Of course, I'm honored kasi Mother Lily met with us pa, Arnold sat me down and made sure, you know, he asks what I wanted, kung ano'ng gustong gawin."

Denise started in showbiz when she was just 10 years old. Mr. Johnny Manahan of Star Magic discovered her in a play of Repertory Philippines. She was given a break in show business through the defunct TV show Ang TV 2. She was also seen in other ABS-CBN shows like Prinsesa ng Banyera, Maging Sino Ka Man, Pedro Penduko at ang mga Engkantao, and Natutulog Ba Ang Diyos.

Aside from acting, Denise also excels in her hosting job on Studio 23. She also became part of MTV Asia's TV show called Rouge, where she played the role of a lead vocalist named Pat.

UPCOMING PROJECTS. With her new contract as a talent of Regal Entertainment, Denise looks forward to having a number of projects lined up for her this year. However, when PEP asked her what her first project would be, Denise answered smiling, "They're keeping it a secret. I think they wanna surprise us."

Although the young actress has no idea about her upcoming projects, Denise is sure that she would be making an album this year.

Her album, she said, would include a variety of music genres.

STAYING FIT. Denise revealed that she is really preparing for her career this year. And one of her preparations is getting her body fit again.

"Yung last [Maalaala Mo Kaya] sa Spain, I gained 15 pounds. E, ako, I'm a sporty person so I wanted to get back into shape also. Siyempre as an image model, or like an influence to children, you always have to, you know... Aside from being emotionally stable, you also have to look pleasant and fit.

"I'm trying to get back into shape, yung shape na I was the beginning of last year—I have my abs and whatever. So after spending time with my family, I'm going back to the gym doing my sports, doing martial arts, doing football."