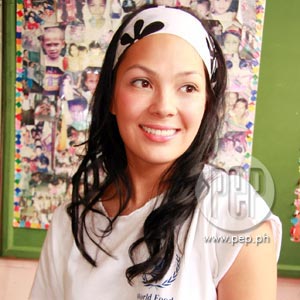 With the return of her father, Gabby Concepcion, young model-actress KC Concepcion expressed her wish for privacy to avoid further issues. "Any family issue or anything that concerns my family with my father or my family with my mother, really, I'd like to keep private," she said earlier today, April 2, during her visit at the Marco Polo Children's Center in Makati City.

Sporting a simple white t-shirt with a logo of the World Food Programme (WFP) modestly inscribed on the left side, a pair of denim jeans and casual rubber shoes, KC Concepcion looked more real and happier in the presence of underprivileged kids.

Exactly five days before her birthday on April 7, KC visited the Marco Polo Children's Center of the Virlaine Foundation in Makati City and donated 10 sacks of rice in behalf of the WFP. Named as WFP's National Ambassador Against Hunger last February 21, the pretty model-actress also celebrated her birthday, handed out toys, and played with the 30 children housed by the center.

The children, whose ages range from 4 to 10, likewise had a fun time playing with their popular celebrity benefactor. Children admitted at Marco Polo Care Center came directly from the street or were referred here by individuals and agencies. Many of the children have been physically abused or sexually exploited.

BRINGING THE FIGHT TO MANILA. KC expressed joy with WFP's efforts to broaden their crusade against hunger and not just concentrate in Mindanao where the group's focus is more intense.

"It's WFP's way of linking the issue of hunger to Metro Manila," said KC to the press while the kids were busy eating their lunch.

"Because as you know, our focus is Mindanao," she stressed, "because Mindanao has been known, you know, the image of Mindanao has not been as positive as we'd like it to be. But also it's not as peaceful as other parts of the country."

The event was also WFP and Virlanie Foundation's birthday gift to KC. Unknown to many, KC is very fond of children—particularly those that have been neglected. Whenever she has the time, the daughter of Megastar Sharon Cuneta and former matinee idol Gabby Concepcion makes sure to visit shelter homes around the metropolis.

According to KC, the WFP is constantly thinking of feasible ways to reach more people, not just to distribute food but also to educate those who are not aware of its advocacy.

"Hopefully, people become more aware of hunger being a real issue," she said. "Not only in the Philippines but all over the world... [it's] the number killer of children. Like I said before more than tuberculosis, HIV and malaria combined and not a lot of people really know that."

FAMILY MATTERS. Last Sunday, March 31, KC's father Gabby Concepcion returned home to Manila after staying in the U.S. for 13 years. In the span of 24 hours since his arrival, Gabby tirelessly did the rounds and even granted a lengthy interview with Boy Abunda of The Buzz where he announced his desire to make a comeback after a long hiatus from acting.

"Honestly, I'd like to keep the issue about Papa private because masyado na siyang..." she paused a bit before continuing, "it's a sensitive issue... Nagkita kami last year, 2006, and I said a lot already there. Di ba, nagpa-interview na rin ako for publications. It's something I'd like to keep private only because there's a right time to talk about details."

But she's very happy that her father was finally able to fulfill his dream of returning home to the Philippines after feeling disillusioned with the state of his career in 1995. KC's also overwhelmed with the attention and warmth shown by the public to her father.

"Maraming nag-aabang sa kanya dito so happy ako for him," she said. "Pero as a family, di ba, nag-release na rin ng statement ‘yong mom ko and I think we'll keep it at that. I want to keep it as private as possible."

KC also refused to comment on the news that Sharon and Gabby have allegedly met clandestinely to iron out whatever issues they still have against each other.