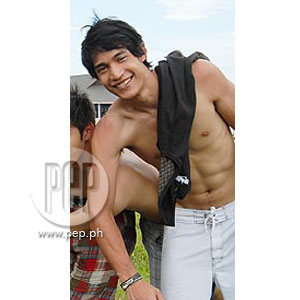 Despite his busy schedule, model-actor Victor Basa still has time for leisure and sports. "Oo naman," he smiled to PEP (Philippine Entertainment Portal). "Nasa 'yo naman ‘yon how you would manage your time."
Hanging out with his Astigs co-stars for the last time made model turned actor Victor Basa emotional. As he himself would put it, "bittersweet," is the exact word to describe the entire Camarines Sur experience.

Wakeboarding, however, was not the chief purpose of the Camarines Sur visit. The Astigs team was there to shoot the farewell episode of the teen-oriented show which will be shown this coming May.

The smile on Victor's boyish face momentarily faded. "It's sad and at the same time I'm happy because a lot in the group, you know, we have shows," added the MTV VJ.

If it's any consolation, Victor pointed out that being part of Astigs helped a lot in honing his acting chops. Just like all of his other young co-stars, Victor humbly acknowledged that when it comes to acting he still had a long way to go.

"I'll miss them. But at least we were able to use this as an opportunity to progress in our acting and I've developed real friendships," he paused before letting out another sigh, "I'm gonna miss this group."

DETERMINED TO LEARN. At first glance, Victor may come across as aloof and rather shy. But that doesn't mean that the skateboard enthusiast is not serious when it comes to his chosen profession.

Referring to the Astigs stint again, he said, "It taught me siguro to love my work."

Aside from Astigs, Victor will also be seen in ABS-CBN's Your Song together with Cathy Gonzaga and Joross Gamboa. He is also excited for the upcoming concert of the Cover Boys on May 9 and 10 at the Music Museum.

Now that he's done with the said teenybopper show, Victor expressed his desire to try various roles, probably more challenging ones. "I wanna try more sa acting like what I did sa Walang Kapalit. But of course I want to try different roles. Any role is great, it will help me."

He is also bent on improving his wakeboarding skills. "Yeah, nakaakyat naman ako nakakapagswitch-switch ako," he smiled while gazing at his fellow stars who were patiently waiting for their turn to plunge.

Although worlds apart in their setting, skateboarding and wakeboarding are very similar, said Victor.

"If you're into skateboarding and you love the culture you'll realize na ganoon din, napaka-friendly lahat ng tao," Victor said in closing.