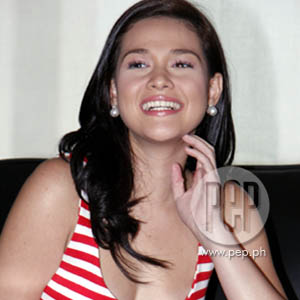 Two days after it was reported that Bea Alonzo bagged the role of Betty La Fea, the young actress was formally launched and presented to the press earlier today, May 8.

"I was so happy and somehow nabigyan na ako ng spark of hope na ako talaga ang gaganap," said Bea during the press conference prepared by ABS-CBN exclusively for her at the 9501 restaurant of ABS-CBN in Quezon City.

According to ABS-CBN Business Unit Head Deo Endrinal, the network secured the rights for Betty La Fea two years ago, but they opted to take time before making the local version.

Branded as one of the most successful telenovelas ever created on modern television, Betty La Fea was first seen in 1999 in the Colombian network RCN. The soap's popularity eventually spread outside Colombia. While some countries dubbed the original series in their own language, other countries went all out and bought Betty La Fea's franchise to allow them to recreate the program and cast their own actors.

BEA ON TOP. For the longest time, speculations flew as to who will portray the local version of the bespectacled ugly-duckling character. The names of Anne Curtis, Toni Gonzaga, Angel Locsin, Ara Mina, Valerie Concepcion, and even Pokwang surfaced as potential prospects. Despite the litany of names being reported from time to time, Deo confessed that Bea's name had always been on top of the list since day one.

"I'm really, really happy and grateful," said Bea while recalling her exact feelings when she was finally informed by the network that she bagged the plum role.

HAPPY TO BE SINGLE. Throughout the press conference, Bea kept expressing her desire to busy herself with work and more work.

"I really, really need this..." she would often remark. The young actress confessed that she went through an emotional period prior to Betty La Fe. With not much work to keep her occupied, Bea found herself dwelling even more on some personal issues.

A few months ago, it was rumored that Bea and boyfriend Mico Palanca decided to call it quits.

Is there any truth to that rumor?

"Let's talk about Betty," she politely begged off. Obviously uncomfortable with the question, Bea thoughtfully added, "Ako, I'm happy being single and I'm happy being free. I'm enjoying my freedom and I'm doing my job, I have new things to do. I'm happy, I'm happy. Let's not talk about it kasi parang mas gusto kong mag-focus kay Betty. I don't want to think about anything else."

"WALANG SULUTAN." Interestingly, Asia's Songbird Regine Velasquez was once touted as one of the choices being considered by ABS-CBN to play Betty. In fact, Regine was reportedly willing to severe ties with her home network GMA-7 so that she could work on the project.

Negotiations fell apart, however, and in the end, Regine stayed put in the Kapuso Network, where she is now doing the Pinoy adaptation of the hit Koreanovela My Name Is Kim Sam Soon.

Given the number of names that were considered and that of Regine's case, it was pretty much expected that Bea would carry the brunt of the "sulutan" issue that popped up immediately after the selection process was closed.