Veteran actress Anita Linda has no plans of retiring yet 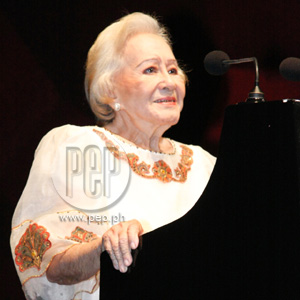 Ms. Anita Linda was overwhelmed by the tribute given to her during the screening of her film Adela. Directed by Adolf Alix, Jr., this movie was the opening film of the 2008 Cinemalaya Philippine Independent Film Festival, which kicked off last night, July 11, at the Cultural Center of the Philippines.


When Ricky Davao was introducing a guest of honor last night, July 11, he told the audience present at the jampacked Main Theater of the Cultural Center of the Philippines, "Mga kaibigan, ito ang isang artista na matatawag nating uliran at namumukod-tangi. Let tonight be her night. Si Adela, the great Anita Linda!"

Guests, artists, students, filmmakers, and members of the media immediately stood up to give a standing ovation to Ms. Anita Linda during the ceremony prior to the screening of her tribute film Adela at the CCP. Directed by Adolf Alix Jr., Adela was the opening film of the Cinemalaya Philippine Independent Film Festival, which is ongoing until July 20, 2008.

In her entry listed in the Internet Movie Database, it says that Ms. Anita Linda has appeared in over 170 films during her career, which started in the 1940s. With a career spanning several decades, she remains very grateful for everything that the entertainment industry has given her.

At the age of 83, she has no plans of leaving showbiz. In fact, she said in her speech: "Ito [movie industry] ay mamahalin ko habang buhay at kung ako ang tatanungin, hindi po ako magre-retire!" Her declaration was greeted by loud applause and cheers from the audience.

TV host Boy Abunda watched the movie Adela along with his ward Erik Santos and theater actor Arnold Reyes. When PEP (Philippine Entertainment Portal) asked him why Ms. Anita Linda deserves a tribute film such as this, he readily answered: "She's brilliant. I think someone who has dedicated her life to film deserves much more than just a tribute. She shouldn't retire. She deserves a tribute because she has given us so much. I think this lady has given the Filipino public so much."

Also present that night were Cinemalaya stars such as Christian Vasquez and Angel Jacob as well as Laurice Guillen, her husband Johnny Delgado and their daughter Ina Feleo. Rosanna Roces also attended the ceremony to introduce Direk Adolf, who will be helming her comeback movie Manila, which is co-produced by Piolo Pascual.

In the movie Adela, screen veteran Anita Linda portrays a lonely woman who is celebrating her eightieth birthday. This role comes to her thirty years after her last leading role in the Lino Brocka film Tatlo, Dalawa, Isa (1974). Two showbiz veterans join her in this film: German Moreno and Perla Bautista (who has a sexually charged scene with a much younger man). Adela is slated to have a regular run in the country this September.

Wearing a Filipiniana dress, Ms. Anita Linda was congratulated by students and guests who all wanted to shake the hand and greet her for this milestone in her life. With everyone wanting to take a photograph with her and talk with her even for a while, it certainly seems that July 11 was certainly Ms. Anita Linda's night.

Click HERE to view schedules of the full-length entries competing in Cinemalaya 2008.