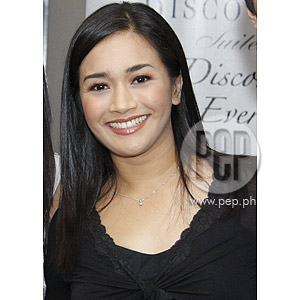 "I encourage everyone because we have so much talent here that I think if an opportunity arrives, then they should definitely audition. The standard here is exactly the same as abroad. So we should never ever feel intimidated because it is so high," says West End actress Joanna Ampil to other stage actors who want to pursue a career abroad.

The media was able to have a short chat with Joanna at the media junket prepared for her and Australian-born Filipina stage actress Rowena Vilar last Wednesday, August 6, at the Discovery Suites in Ortigas Center, Pasig City.

Joanna related that when she found out about the audition for West Side Story, she immediately called STAGES president Audie Gemora to tell her intention to be part of its cast.

"It's been my passion to be in West Side Story," said Joanna. It's my favorite musical. I saw it in London two years ago and it really appealed to me, the part [Maria] really appeals to me."

Another reason Joanna wanted to be part of West Side Story was the opportunity to perform for a Filipino audience. This Broadway piece is her first major musical assignment in the Philippines. She last performed in the country in the concert East Meets West at the Cultural Center of the Philippines in 2003.

"I'm passionate about the show. Also it's very important for me to be able to perform for my fellow Filipinos," said Joanna.

Joanna left the country 16 years ago to star in the London and Sydney productions of Miss Saigon. In 1995, she recorded the lead vocals in the international symphonic recording of the hit musical, which is the only official complete recording of Miss Saigon.

JOANNA SINGS FOR THE PRESS. Before the formal press conference began, Joanna performed some of the songs she did in the previous musicals. She had played the role of Kim in Miss Saigon, Eponine (2000) and Fantine (2003 and 2007) in Les Miserables, and Mary Magdalene in Jesus Christ Superstar (1996).

She sang with emotion the songs "I Dreamed a Dream" from Les Misarables and "I Don't Know How to Love Him" from Jesus Christ Superstar. And then she did a duet with Christian Bautista,—who plays Tony in West Side Story—singing "Sun and Moon" from Miss Saigon and "Tonight" from West Side Story.

What is the difference between playing a role in Miss Saigon and in West Side Story?

Joanna answered, "The singing is very, very different because in Miss Saigon, it's all belty whereas in West Side Story it sounds like a soprano in classical way. So, I wanted to challenge myself as well in that sense, that's why I wanted to do the role."

The actress admitted that she still gets nervous while performing in front of the media. "I'm very nervous," she said.

This just proves that no matter how experienced she is in performing on stage, she still gets jitters in some of her performances.

But what does she do when she has this feeling? Joanna replied, "Oh, gosh, do a lot of breathing exercises and I pray just before the performance."

Joanna has done almost all the roles that a stage actress could dream of. Does she still have a dream role waiting to be fulfilled?

She said, "You know, it's funny. After Miss Saigon, I was content already. You know, the other shows that I did after Miss Saigon have been bonuses for me until I found out the audition for the West Side Story. So, I feel very happy with my CV [curriculum vitae]."

BONDING WITH CO-ACTORS. In her few days here in Manila, Joanna has already started to bond with her co-actors. She said that this is very significant if one is part of a production.

As a London-based stage actress, what did she learn from West End that she would want to impart to our local actors?

"I guess it's the professionalism, being all on time, all the time," said Joanna. "You know, the Filipino way is like being late a lot so I just try to make sure that I'm early to show people, you know, ‘You gotta be early, really.'"

Joanna advises those who dream of becoming successful stage actors: "Well, just persevere and stick to your passion, stick to your dream, and never ever take anything personally."

Joanna will join the other cast members—Karylle, Christian Bautista, Gian Magdangal, and Rowena Vilar—in the restaging of West Side Story, which will run from September 5 to October 12 at the Meralco Theater.