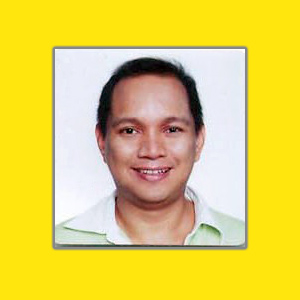 Jojo Gabinete is a contributor of PEP (Philippine Entertainment Portal). His most controversial scoop? The story of Hope Centeno and her alleged affair with James Yap, husband of Kris Aquino.

"Cabinet files" about showbiz will be reopened with Jojo Gabinete's entry to the blog world of PEP (Philippine Entertainment Portal).

The Abante columnist says he will not write tsismis. But he will break news.

Way back in 1986, the showbiz reporter used to work as a sales clerk in Fairmart Cubao. He was assigned by his supervisor to oversee the filming of Payaso, which was topbilled by German Moreno and directed by Celso Ad Castillo. He recalled fondly, "Nalasing si direk 'tapos nagwala. Ayaw na niyang gawin ang movie."

That set off his being an insider.

He gave Fred Marquez+ of People's Tonight a phone call and became the source of the news.

Seven years later, he came face to face with Fred. Jojo worked as the liaison officer of this magazine, which was put up by a classmate based in Singapore, and he turned to Fred and Alfie Lorenzo for his showbiz news. "Nabanggit ko ke Fred na ako yung tumawag noon tungkol sa Payaso at naalala naman niya."

He initially used a pen name, and later he was given his own column, and now, a blog here in PEP.

The first celebrity he ever interviewed was the late Ricky Belmonte, and the first controversial interview he published was with Liezl Sicangco, who revealed Robin Padilla's affair with Vina Morales.

For his first PEP blog entry, he will give a quick rundown of the "memorable" things which happened in showbiz these past few weeks.

And that's just the tip of the iceberg.

Enjoy his candid observations. Discover the depth of his character. Get ready for his revelations. Open CABINET FILES now!