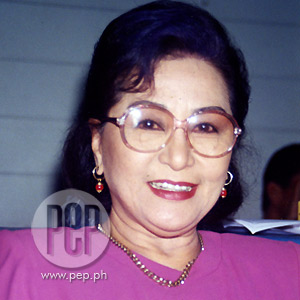 "It's a good thing. Now, I can focus on prosecution. When Tita Elena [dela Paz] was accused, nahati attention ko. It's a big mistake, the testimony of one person [Francisco]. I knew in my heart she was innocent," says Nida Blanca's daughter Kaye Torres about the decision released by the Department of Justice.

The Department of Justice (DOJ) cleared Elena dela Paz from any involvement in the murder of actress Nida Blanca on November 2001. (Click here to read related article.)

Based on the report of GMA News yesterday, December 8, the DOJ also approved in its 12-page resolution the petition for review filed by Dela Paz, Nida's former assistant. The said petition cited sufficient basis to declare her innocent.

Dela Paz was named as an accomplice in the killing of the veteran actress after a certain Ranny Francisco testified that she was with Nida before she was killed.

In an interview, Dela Paz was in tears while expressing her relief over the DOJ's decision.

"[Francisco] saw what would seem like Elena. When standing alone, the testimony of Francisco would stand for probable cause, but against other testimonies the weight of Francisco's wasn't as strong as we thought. We should use benefit of the doubt," said Secretary Gonzalez.

Nida's daughter Kaye Torres also felt relieved that Dela Paz was absolved from the case. She also said that she never thought of Dela Paz being involved on the murder of her mother.

She further said, "It's a good thing. Now, I can focus on prosecution. When Tita Elena was accused, nahati attention ko. It's a big mistake, the testimony of one person [Francisco]. I knew in my heart she was innocent."

Nida, or Dorothy Acueza Jones in real life, was found stabbed to death at the back seat of her car parked at the Atlanta Center in Greenhilss, San Juan City on November 7, 2001.