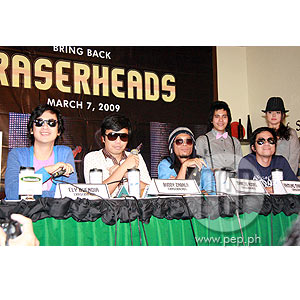 The legendary quartet of (from left) Ely Buendia, Buddy Zabala, Marcus Adoro and Raimund Marasigan—collectively known as the Eraserheads—will play as one rocking unit anew on March 7 to conclude the band's unfinished reunion concert held last year. Asked if they are planning to convene this time inside the studio to record a new album, frontman Ely Buendia quickly replied, "Wala," before adding, "Sa ngayon, wala." &lt

The stage is set for the second installment of the Eraserheads reunion concert.

At the MTV-Philippines press conference this afternoon, January 19, held at Italianni's restaurant on Bonifacio High Street, Taguig City, the band announced that the big event will be held at the SM Mall of Asia concert grounds in Pasay City on March 7.

Tentatively titled The Final Set, the concert will once again feature Ely Buendia, Marcus Adoro, Buddy Zabala, and Raimund Marasigan on one stage.

The band's first reunion concert last August 30, 2008 at the Bonifacio Global City open field in Taguig ended abruptly after 15 songs when lead singer Buendia suffered chest pains and had to be rushed to the hospital. The legendary quartet was supposed to perform 30 of their original songs, which comprise the bulk of their entire catalog.

TOTALLY DIFFERENT. All four members graced the press conference and though the band retained that trademark nonchalance in answering questions, they collectively expressed excitement about playing together anew as one unit in front of a large audience.

A in the first installment, the one-night affair will feature only the Eraserheads with Jazz Nicholas of the Itchyworms serving as auxiliary musician to complement the arrangement of some of the songs. When they were still active as a group, the Eraserheads used to enlist the services of multi-instrumentalist Noel Garcia to tighten their live set. Unfortunately, Noel passed away a few years ago after a heart attack.

Raimund dismissed the impression that the upcoming event will only serve as a continuation of the first reunion. He argued that the band and the production team prepared something new and different from last year's concert.

The fact that preparations are being laid out this early also means that the concert is more organized. MTV announced that further details will be made public in the coming weeks.

As for Ely's health, the enigmatic singer-songwriter assured the press that he's doing fine.

"I'm just doing all that I can to prepare myself physically, at least," said Ely, who just like his former comrades came to the presscon sporting a pair of dark shades. He confidently added, "So far, yeah, I'm in good condition to play."