Viva Hot Babes Katya, Maui, and Andrea reunite on the cover of FHM 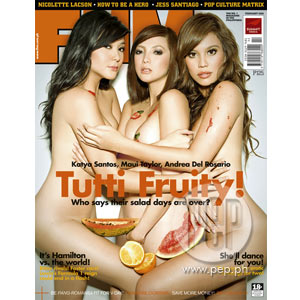 Former Viva Hot Babes (from left) Katya Santos, Maui Taylor, and Andrea del Rosario pose seductively with their hands and fruits on the proper places for the cover of FHM.

Who could ever forget how the Viva Hot Babes heated up the big screen in early 2000? The smokin’ hot girl group set the standard for all the sexy girl groups to follow in their wake, and made household names of the eight original members. The group has since disbanded, the girls have made names for themselves by pursuing individual careers, but future bombshells continue to try and live up to the original Viva Hot Babes.

“[The Viva Hot Babes] was a phenomenal gig,” Andrea recalls, “We were the first sexy group and nobody was as palaban as us. It was quite a ride.”

Looks like that palaban spirit has yet to die down. Katya shares that despite initial apprehensions about going through with the shoot, they agreed to do it. “Dahil ang tagal na namin hindi nag-pose, medyo naninibago nang konti,” she says. “Medyo nakakatakot kasi sobrang sexy. Pero dahil maganda naman talaga yung concept, ang hirap tanggihan, so go na lang!”

The three girls are no strangers to FHM. For Maui, this marks the fourth time she has stood under the FHM masthead since she debuted in the summer of 2002—snatching the record of the most number of appearances on the FHM cover.

“I feel kinda strange doing this again [though], because I’m not used to doing these pictorials anymore," Maui admits. “But when I found out that this would be my fourth time on the FHM cover, I was, like, great, thank you. I trust FHM as much as you trust me.” Andrea and Katya are staples in the pages of FHM as well—Andrea is giving Maui a run for her money with three appearances on FHM’s cover.

Does this FHM appearance spell a reunion for the Viva Hot Babes? Find out by grabbing a copy of the February issue of FHM, available in newsstands, bookstores, and supermarkets nationwide. For more of FHM online, log on to www.fhm.com.ph.