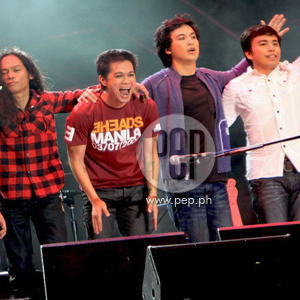 The image of ex-Eraserheads frontman Ely Buendia setting his worn out sticker-battered piano on fire perhaps best translated what the Final Set meant to the entire Eraserheads circle: closure.

Playing as one unit once again, but perhaps for the last time, the band composed of Ely Buendia, Marcus Adoro, Buddy Zabala, and Raimund Marasigan relived the Eraserheads phenomenon, which swept the country and revolutionized the OPM landscape in the early '90s.

The concert drew an estimated crowd of "more than a hundred thousand," according to MTV's Jad Deveza.

PLAYING THE HITS AND MORE. Fans trooped to the MOA Concert Grounds as early as noontime with the intention of getting the best spot in the huge open field venue. By around eight in the evening, the entire place was brimming with anticipation and excitement.

MTV Philippines heightened the thrill by showing old clips of the band taken during the quartet's heyday. The videos were a collage of various MTV appearances and interviews mixed with current ones related to the reunion concert.

Despite the absence of a climactic countdown—definitely one of the highlights of last year's concert—the open field literally rocked the minute the silhouette image of the four members came on stage.

The Eraserheads opened their set with the witty "Magasin," which was taken from the band's second album, Circus (1994). As expected, the band, Ely in particular, talked little to the crowd, dishing out the songs one after the other.

In an interview days before the concert, Marasigan revealed that the band agreed to perform most of the materials during their early days. That means songs lifted from the Eraserheads first three albums; namely Ultraelectromagneticpop! (1993) Circus and Cutterpillow (1995) were given priority to keep the crowd in high energy throughout the night. Majority of the songs included in the mentioned albums were highly popular as they were all released at the time the Eraserheads were at the peak of their game.

The crowd went wild as guitarist Marcus Adoro (highly regarded as the quiet one among the four) assumed vocal duties to play a reggae version of "Huwag Mo Nang Itanong," and completely veering away from the recorded version.

Drummer Raimund Marasigan temporarily abandoned the drum kit to sing two of the Eraserheads punk tunes: "Alkohol" and "Insomnia." Raimund also delivered the dance-inspired tune, "Slo Mo." Many surmised that Marcus and Raimund took over the vocals awhile to lighten Ely's load and help preserve his voice, given the long set list.

TRIP DOWN MEMORY LANE. Going for a more laidback vibe, the Eraserheads, along with auxiliary musician Jazz Nicholas (of the band Itchyworms), performed an acoustic rendition of the songs "Julie Tearjerky," "Wishing Wells," and "Fine Time."

Ely amplified the prevailing nostalgia by saying first, "Let's go back to a place..." before strumming the recognizable chords of "Pare Ko"—much to the delight of the crowd who collectively shouted and cursed along with Ely.

Going electric once again, the band dished out "Back 2 Me," Trip to Jerusalem," "Spoliarium," "Overdrive," and "Minsan."

Overly conscious not to repeat the version they did at the first reunion concert, the group performed the anthemic "Alapaap" on a much slower tempo. The evening, of course, would not be complete without the tragic classic hit ditty "Huling El Bimbo."

As the number drew to a close, Ely doused his old piano with lighter fluid before setting it on fire. He then proceeded to thrash the iconic piano, stomping on it repeatedly as if he's burying all the memories associated with his old possession. Fans well familiar with the Eraserheads history recognized the piano as the same one used in the cover of the band's 1997 album Sticker Happy.

Colorful fireworks adorned the evening sky as the final strains of "Huling El Bimbo" reverberated from the speakers.

"Three for the road," announced Buendia when the band came back to do a three-song encore composed of "Ligaya," "Sembreak," and "Toyang."

NO GROUP HUGS. As Raimund initially announced, there were no group hug among the four members. The group hug demand—repeatedly chanted by the fans as a physical manifestation that all's well between the former bandmates—started at the first reunion concert and was carried over to last night's affair.

The Eraserheads played along by retorting, "Kayo muna!" every time the crowd chanted, "Group hug!"

Despite the absence of a "group hug" fans might as well take consolation from the fact that compared to the first reunion concert, the Final Set showed Ely, Marcus, Buddy and Raimund talking and even acknowledging one another. There was obviously more group rapport this time.

Before exiting the stage, Ely, Marcus, Buddy, and Raimund together with Jazz gathered to take one final bow. "We are the Eraserheads!" Ely told the enthusiastic crowd as the band set out to exit the stage, a sense of finality lingering in the air.

To all of those who grew up listening to the music of the legendary quartet, six years of not playing together, marred with conflict and drama, doesn't diminish the band's well-deserved fame. Ely, Marcus, Buddy and Raimund—despite their respective individual careers—will always be the Eraserheads.