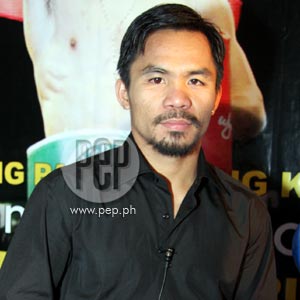 According to broadcast giant ABS-CBN, Manny Pacquiao's decision to team up with the network is just and lawful. The Pinoy boxing idol recently granted broadcast rights of his matches to the Lopez-owned network over former media partners GMA-7 and Solar Sports.

ABS-CBN defended its position in the controversy involving the broadcast rights of Manny Pacquiao's upcoming duel against British slugger, Ricky Hatton, and other future fights.

A report posted here in PEP (Philippine Entertainment Portal) on March 18, revealed that the Pinoy boxing icon had decided to sever ties with former partners GMA-7 and Solar Sports to pave the way for the Lopez-owned network to gain exclusive rights.

Manny is scheduled to square off against Hatton on May 2 at the MGM Grand in Las Vegas, Nevada in a mega-buck fight billed as The Battle of East and West.

Pacquiao's former media partners expressed disappointment with the sudden turn of events. Both GMA-7 and Solar Sports reminded Manny of their contract provisions. Though no direct warning has been issued so far, it was evident that both parties would not hesitate to resort to legal means once the need arises.

NO VIOLATION. In a statement issued by ABS-CBN to PEP this afternoon, the network aired its side, at the same time disregarding initial accusations that legal violations were being committed. The network dismissed claims that political favors were exchanged for the deal.

"We understand GMA-7's disappointment about the decision of Manny Pacquiao to have ABS-CBN as its media partner, but it should avoid making thinly veiled accusations based on a columnist's speculation. It alleged that ABS-CBN's supremacy in reach is to be used for Manny Pacquiao's political plans—which is not true," reads the statement furnished by Bong Osorio, Head of ABS-CBN Corporate Communications.

"ABS-CBN's airing of Manny Pacquiao's fights will not violate his contract with GMA, which prohibits Pacquiao from appearing on "any television program, show, promotion or event of any other broadcast media entity." Manny's fights are not programs, shows, promotion, or events of ABS-CBN. As the media partner of Manny Pacquiao, the Kapamilya network will only be airing Pacquiao's boxing matches that will be produced by Top Rank.

"We also believe that there is no basis for Solar Entertainment Corporation to take legal action. ABS-CBN did not violate Solar's rights. Pacquiao rescinded his contract with Solar before he approached ABS-CBN to be his media partner. We merely welcomed him as a Kapamilya."