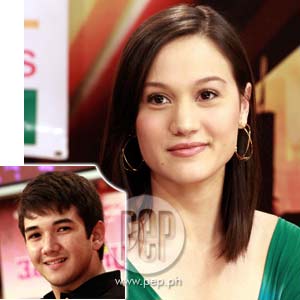 Although the stars of Your Song Presents: Underage already had their last taping recently, Melissa Ricks said that there is still more to watch out for in this eight-part ABS-CBN Sunday drama.

"Naku, manood kayo marami pang magaganap na ikawiwindang ninyo!" said the young actress, adding that she really had a hard time portraying her role as Celina in this series, which is a TV adaptation of '80s Regal movie.

Speaking of her upcoming ABS-CBN soap, Melissa said that she's glad to be paired again with her former Pedro Penduko co-star, who has become her onscreen partner for almost three years now.

MORE DARING PROJECT. Before her interview with PEP, TV director Manny Palo teased melissa and Matt about the kissing scene that they did for Underage. The director gave some pointers to the young love team about what they could have done to make the scene better.

PEP asked Melissa what else can they give to Pinoy viewers in their next project. She jested: "Mas daring... Mas daring si Matt!"

This just proves that Melissa is still not comfortable doing such scenes even if she has been Matt's partner ever since Komiks Presents: Da Adventures of Pedro Penduko.

But Melissa is willing to give more on their next project only if it's needed on the scene.

"I will prepare myself!" she laughed. "Kailangang maghanda ako sa ganyan. Kailangang mag-workshop ako para naman for a change."

During the interview, Direk Manny joined the conversation to tell an incident where Melissa received flowers from Jake while they were taping in Tanay, Rizal for Underage. So is it true that Jake is still sending her flowers?

Melissa, trying to veer away from the topic, replied: "Minsan."

Melissa admitted that she's worried that this issue might affect her successful team up with Matt.

MATT REACTS. Melissa's onscreen partner Matt was seated beside her the whole time during the interview, so he was also asked about the possible effect of news about Jake and Melissa to their love team

Although, he admitted that this may affect the current status of their professional relationship as a love team.