Andrew Wolff explains his side on gun-grabbing incident in Boracay 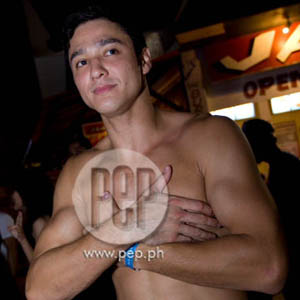 Andrew Wolff airs his side of the story about an alleged robbery at the Hey Jude Bar in Boracay. After his experience behind bars, he shares his lesson from the incident.

Model-actor Andrew Wolff's involvement in a scuffle inside a bar in Boracay on the night of April 6, Monday, resulted in his being handcuffed and spending nine hours in jail. (Click here to read related story.)

Andrew aired his side of the story through an interview with The Buzz host Boy Abunda aired earlier today, April 12.

Andrew revealed that he was detained for about nine hours at the Boracay Police Station. He added that he and the guard, Rodolfo Norbe, eventually realized that the incident was all a misunderstanding.

"He was just doing his job," Andrew said. "He thought I was trespassing sa restricted area sa bar na I reacted instinctively as self-defense."

So, did Andrew and the guard agree that the incident was just a case of misinterpreted action?

"Yes," answered Andrew. He explained that, being labeled as a bad boy, his involvement in ordinary issues could easily turn into hype.

"A slight issue, e, pinalalaki na hindi po dapat," he said. "I just want to say sorry sa lahat ng mga involved. I hope maintindihan n'yo po na it was all a misunderstanding. The guard was just doing his job and I give him credit."

ANDREW'S STORY. He was just going up to Hey Jude bar's second floor when the incident happened.

Why was Andrew going up to the second floor?

When the police arrived, Andrew was cuffed and led to the police station. During that time, what did he feel?

Andrew was then taken to Kalibo, Aklan, where he was supposed to face robbery charges. Now that the charges were dropped, speculations arose: Did he pay any damages or do anything to make the police change their mind?

"No, we just talked with the guard. No settlement," Andrew said.

CHARGES DROPPED. The understanding between Andrew and Norbe came to a good end and with the charges against Andrew dropped for good. With this good news comes a price: The emotional impact on Andrew and his family.

Now that his experience with the police over, will Andrew finally ditch the 'bad boy' image?

"I'm a good boy and, of course, I've been branded as a bad boy before. So any situation or incident I get involved in, the press seems to hype it all up," he complained.

What will Andrew do now to avoid these kinds of incidents?

Andrew paused for a moment and said, "However much na mag-ingat ako, e, lumalapit. Pero I just want to live a normal life, mabuhay nang tahimik."

The most important lesson for Andrew this time was: "Don't get caught in restricted areas."