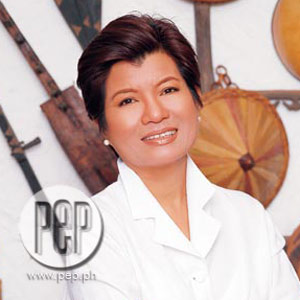 Veteran broadcaster Cheche Lazaro said that the wire-tapping case filed against her by the GSIS was "a small price to pay" for featuring the agency's alleged failure to distribute financial assistance to retired public school teachers.

Veteran broadcaster Cheche Lazaro believes that the wire-tapping case filed against her by Government Service Insurance System (GSIS) vice-president for communications Ella Valencerina is an outright form of harassment.

The GSIS official alleged that Lazaro, host of the late-night news magazine show Probe, recorded then aired a phone interview with her without her consent. The phone conversation was included in the November 12, 2008 episode of Probe, which tackled the agency's alleged failure to deliver its commitment to provide financial support to retired public school teachers.

Valencerina said that she was equally surprised to see a video footage of Lazaro while on the phone talking to her.

ABS-CBN president Charo Santos-Concio, along with other network staff, were also cited in the complaint as respondents. Lazaro posted a P12,500 bail last May 8 for her temporary liberty at the Pasay Metropolitan Trial Court Branch 47 following the issuance of an arrest warrant.

"It is mind-boggling why I am being singled out for prosecution for following the tenets of responsible journalism," Lazaro told reporters. She argued that Valencerina was aware right from the start that the phone conversation was being recorded.

"Probe will not be intimidated into submission. In the last 22 years, Probe has carved a niche in the industry and won recognition here and abroad for consistently adhering to time-honored journalistic values of accuracy, fairness and objectivity," said Lazaro in a statement.

A falling-out with GMA-7 prompted Lazaro to move to ABC-5 (now known as TV5) where she stayed for a year before returning to ABS-CBN in 2005.

A distinguished and multi-awarded journalist-broadcaster, Lazaro is also currently serving as a board member and board adviser for the Philippine Center for Investigative Journalism.