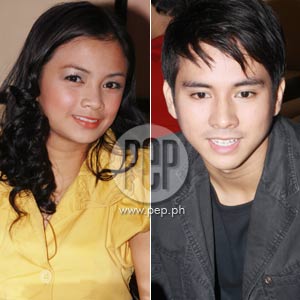 Two of the fresh faces to grace Lipgloss's new season are Rhen Escano and Enz Guazon. Both newbies earned the slot after passing the audition.

The addition of new cast members was decided by the producers to give the show a fresh look to match Lipgloss's new twists and turns.

Sam Concepcion and Saab Magalona were curiously dropped from the show's roster. Sam's departure was said to be amicable while Saab's case continues to be shrouded with intrigue—a fact that the producers never hesitated to confirm at the press conference.

Saab's personal issues and scheduling problems were said to be the determining factor in their decision to let go of the young actress.

A FRESH START. Two of the show's new members are Rhen Escano and Enz Guazon. In a conversation with PEP (Philippine Entertainment Portal), both acknowledged that Lipgloss—given the fact that the program is meant to cater to a young audience—is not your typical local teen-oriented show.

"Mas mature ang attack," said Enz, who admitted being caught off guard regarding the topless pictorial the boys were asked to have as part of the show's promo.

Though still overwhelmed by their newfound profession, Rhen and Enz happily shared that they're enjoying the ride so far and they hope to stay in show business for years to come.

For Enz, who used to dream of being a professional basketball player, show business opened a new window of opportunity.