Anne Curtis keeps mum about her rumored "man of the moment" 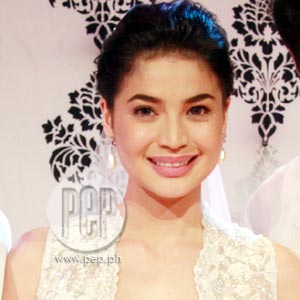 The Wedding actress Anne Curtis refused to talk about Erwan Heusaff, a French-Filipino entrepreneur, who was seen with her during the surprise birthday bash for Ruffa Gutierrez. She repeatedly told the media, "You know, as much as possible, I'd like to keep mum about it."

Actress Anne Curtis pleaded many times to the entertainment press not to talk about the non-showbiz guy she was with during the surprise birthday party for Ruffa Gutierrez recently.

In Maurice Arcache's column titled "Without Batting An Eyelash," published by a national daily yesterday, June 24, he described the moment between the 24-year-old actress and the non-showbiz guy. It read: "In another corner was another gorgeous lady, Anne Curtis, with her man of the moment, good-looking French-Filipino entrepreneur Erwan Heussaff, who shuffles to Manila and Paris for his work. They keep a low profile of togetherness, palanggas."

Erwan Heusaff can be connected to Anne through his model sister, Solenn Heusaff, who is an image model for the clothing brand Penshoppe and a close friend of the young actress.

Because of Maurice's column, the entertainment press present at the presscon of The Wedding—Anne's latest primetime series in ABS-CBN—prodded Anne to say something about the guy, who was pictured with her during the party.

But Anne was tight-lipped and repeatedly said: "Can we not talk about it, please?"

She explained, "I don't wanna talk about it talaga. I'd rather keep it kasi ano, e... It's something that I want to keep on to myself. I'm not comfortable yet talking about it. When it's the right time...kasi we're just getting to know [each other], e. I can't say anything about it."

Is keeping quiet about her lovelife one of the changes that Anne wanted after her breakup with Sam Milby?

"You know, that's something I keep on a mum for a while. If there's anything [sure already], you know, I've always been open about it. For now, I just rather quiet about it," she said.

When asked about the current status of her relationship with Erwan, Anne gave a big smile and said, "Basta I'd rather not talk about it. But we're good. Let's see what happens."

The only clear thing that Anne could give about her lovelife was: "Right now, I'm open to dating and I'm happy, that's what matters. And I really just want to keep quiet about it muna. It's just too early to say anything."