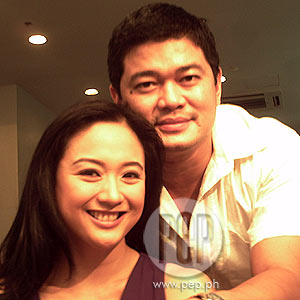 TV host Christine Bersola-Babao (in photo with husband Julius Babao), three-months pregnant with their second child, said she is experiencing a relatively easier pregnancy than when she was carrying Antonia. The only drawback is that her sleeping patterns have become irregular. "Sobrang antukin ako during the day. Tapos nag-iinsomnia ako. Grabe ako mag-insomnia. From 12mn to 5am gising ako. Parang inaantok lang ako pag nakikita ko na ang araw," Tintin

One of Christine Bersola-Babao's dream projects is to have her own parenting show. According to the former Magandang Umaga Pilipinas host, she had been proposing the idea to her home network since two years ago, but the plan never took off.

That's why she was happy to follow the advice of her husband, broadcaster Julius Babao, to start an online parenting show for herself called parenTIN.tv, which was formally launched earlier today, July 21, at Lancaster Hotels in Mandaluyong City.

The online channel will feature a 30-minute bi-weekly parenting program hosted by Tintin, with expert opinions on parenting and an online community for mothers all over the world.

The 38-year old celebrity host said that she started working on the website since March, after her TV shows Look Who's Cooking (ABC-5) and Busog Lusog (ABS-CBN) ended. Tintin said she has already spent about half a million from her savings to finance the project.

Does she have any regrets?

"If it's something you pursue because it's your passion, it's always worth it," said the TV host.

PREGNANCY. Tintin also talked about her three-month pregnancy, which she claims is easier than her first pregnancy with daughter Antonia, now four years old, when she experienced spotting. The only drawback with the second pregnancy, however, is that her sleeping patterns have become irregular.

At this early stage of pregnancy, the celebrity host said that she and husband Julius still do not know the sex of their second child. The couple, however, already picked a masculine name because they are praying for a boy.