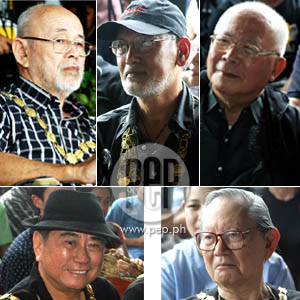 Five National Artist awardees led a petition to the Supreme Court yesterday, August 19, to stop Pres. Macapagal-Arroyo from conferring the National Artist awards to four of this year's seven nominees, who did not pass through the strict selection process required by law to earn the high artistic merit, as reported by GMANews.TV.

In a 38-page petition, the group asked the high court to issue a temporary restraining order (or status quo order) to stop Malacañang from giving the awards to Carlo J. Caparas (film and visual arts), Cecile Guidote Alvarez (theater), Jose "Pitoy" Moreno (fashion design), and Francisco "Bobby" Mañosa (architecture).These four were among the seven new National Artists that the President picked on July 29.

The Cultural Center of the Philippines (CCP) and the Commission on Culture and the Arts (NCCA) jointly administer the awards. The two institutions decide who would be given the distinction through a rigorous screening process spanning three years.

The CCP and the NCCA then recommends the selected names to the President for confirmation, proclamation, and conferral.

Upon conferment, National Artist awardees become eligible to a cash award of up to 100,000 pesos at the time of conferment, a monthly life pension, medical and hospitalization benefits, life insurance coverage, and arrangements for a state funeral.

"DAGDAG-BAWAS." According to the petitioners, Arroyo committed "grave abuse of discretion" when she added the new names to the already existing list. Malacañang, however, continues to emphasize the President's "prerogative" in composing her own list of awardees.

Ramon Santos (music), a Filipino composer whose works have been performed in major music festivals around the world, had been dropped from the list.

Santos, who received the highest votes from the selection committee, has not released any statement about the issue. Reports said that he underwent an 11-hour delicate heart surgery in the Philippine Heart Center on August 13 for suspected aneurysm.

WHO IS QUALIFIED? The petitioners also criticized the nomination of Alvarez and Caparas, citing several irregularities.

They pointed out that Alvarez currently sits as the NCCA's executive director and as presidential adviser on culture. Alvarez also heads the NCCA secretariat that receives nominations for national artists.

The guideline for the selection of National Artists automatically disqualifies NCCA and CCP board members and consultants from nominations.

Caparas had been pronounced "undeserving" of the award by the petitioners.

Earlier, comic artist Gerry Alanguilan assailed the "Massacre King" because he had not drawn the works he had been awarded for.

"The puzzling thing is, CJC is NOT an illustrator. He has never drawn any of this comic book stories, least of all his most popular creations, Panday and Pieta, were drawn by Steve Gan. Bakekang was drawn by Mar Santana. How can someone who is NOT a visual artist get the National Artist title for visual arts?" Alanguilan argued.

Online lifestyle magazine Spot.ph also published last Monday, August 17, the statement of the family of the deceased comic artist Mars Ravelo on the issue. It denounced Caparas's hold on the name "Komiks King," a title they said was stolen from Ravelo.

"Thru dubious press releases, Carlo Caparas proclaimed himself the Komiks King. A title which, we know Caparas very well knows, belongs to Mars Ravelo. Mars Ravelo earned it thru the merits of his work... One day, Caparas, brazenly grabbed it for himself. Just like that. And it's not even up for grabs," they said.

MALACAÑANG ACCEPTS CHALLENGE. Press Secretary Cerge Remonde said in a media briefing on Wednesday that the Palace welcomes the petition to the Supreme Court.

"So finally, this can be settled by the court of law," Remonde said shortly after the petition was filed at the high court.

Remonde refused to comment on whether the President is willing to reconsider her choices. He added, however, that they would resolve the issue through a dialogue with "certain sectors," which he refused to identify.