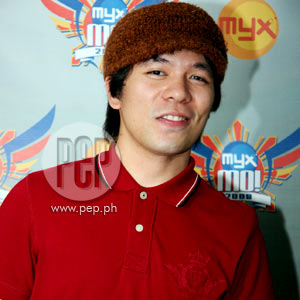 With Pinoy Big Brother gearing to open its new season this October, ex-Orange & Lemons and now Kenyo frontman Mcoy Fundales reminisced on the impact of the show on his career. "Yong mga hindi naabot na market ng O n' L before I was able to reach out to them through PBB. I'm very blessed na people recognized me, the music fans knew me as the guy from O n' L or from Kenyo while some recognized me as that guy fro

Formed in 2008, Kenyo was founded by Mcoy following the breakup of Orange & Lemons, reportedly brought about by creative differences and aggravated by management issues.

Orange & Lemons first made waves in the underground music circuit in 2003 with the release of their debut independent record, Love in the Land of Rubber Shoes and Dirty Ice Cream, under Terno Records.

Buoyed by the success of their first effort, the band announced its entry to the mainstream through Strike Whilst the Iron is Hot—the band's second album produced by Universal Records. Radio-friendly singles like "Hanggang Kailan (Umuwi Ka Na Baby)," "Heaven Knows (This Angel Has Flown)," and "Lihim," Strike Whilst the Iron is Hot made the album an instant seller despite the piracy issue hounding the entire OPM industry.

Unfortunately, tension between Mcoy and songwriting partner Clem Castro over creative and other personal issues tore the band apart. Months after the launching of Moonlane Gardens and with promotions still running actively, the band decided to call it quits after Clem was reportedly kicked out by management.

With Orange & Lemons permanently out of the picture, Clem formed his own independent band, The Camerawalls, while Mcoy recruited old bandmates Ace and JM to help him set up Kenyo. Kenyo's debut album, Radiosurfing, released under Universal Records was launched in 2008 to mixed reviews.

With the release of Kenyo's second album, Maharlika, Mcoy hopes to silence the critics who accuse the band of living under the ghost of its past and "trying hard" to duplicate the success of its predecessor.

"We wouldn't want to engage in verbal arguments. We just wrote and wrote songs and I guess this album is a testament of that, of what we've been doing in the past. We'll answer our critics through actions na lang, meaning to say, through songs and materials."

Mcoy confessed that he and ex-bandmate, Clem, are still not on speaking terms since their fallout two years ago. This is surprising, considering the small local rock scene where bands are usually booked in volumes during most events and productions.

"I had no chance of seeing him or bumping into him. For some reason wala," Mcoy revealed. "From a distance lang. When was the last time I saw him? I think at this event, we just finished playing in Eastwood and I was saying goodbye to friends and then I just heard they're on and when I look, they're going onstage. But it was not near enough for us to even see each other close."

A PROUD HOUSEMATE. Seeing Mcoy in person, we couldn't help but remember his stint as one of the celebrity housemates of ABS-CBN's popular reality-based program, Pinoy Big Brother.

Mcoy's association with PBB started when Orange & Lemons was asked by ABS-CBN management to record the show's theme song. The band came up with the massive yet widely controversial hit, "Pinoy Ako." Despite accusations of plagiarism hurled against the band, "Pinoy Ako" stood as one of the band's signature hits.

In 2007, Mcoy entered the show as one of its celebrity housemates. The Bulacan native singer-songwriter quit after figuring in a heated argument with Kuya—the show's omnipotent unseen figure who serves as guardian to the contestants.

"The day I went out," Mcoy replied with a laugh when asked about his fondest memory during his PBB stint.

"Everything happened so fast pero no regrets kasi after that naman, a day after, maayos naman lahat, all the misunderstandings were ironed out and right now I'm still in good relationship with them.

"I'm still good friends with the housemates and even with the staff. As a matter of fact, I'm helping them promote the new season, so I treasure everything."

In hindsight joining PBB taught Mcoy the value of leadership, which he now applies as Kenyo's main man and chief creative force.

"I learned na I could lead people without compromising 'yong pakikisama," he said seriously.

"Kasi nung nasa loob ako I was able to head the task and to mobilize the housemates without creating any tension between me and them, everybody was willing to follow my lead. So I realized na I had the ability to guide them. Dun ko din nakita 'yong weaknesses ko, like I tend to get passionate and emotional about stuff and sa sobrang passion and emotion, nawawalan ako ng control sa salita ko and sa action. Every time I remember that, ngayon, before I blow my top, it makes me 'Ops, hindi maganda 'to.'"

He dismissed the initial perception that staying inside Big Brother's house could be oppressive to one's creativity.

"Actually dun ko nga unang pinakita sa tao na I can write songs spontaneously," Mcoy proudly said. "I was given a task to write a song for a concert, so they gave me a pen and a paper, so in front of national TV you'd see me composing. Dun nakita ng mga tao 'yong style ko na I usually start with basic chords then as I progressed, ine-edit ko 'yong composition. I realized that I can be creative even under pressure."

Proving that real artists thrive even under the most stifling conditions, Mcoy added modestly, "Actually I work much better when I'm pressured."