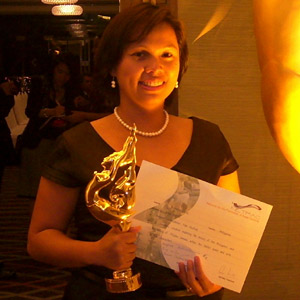 Independencia producer Arleen Cuevas (in photo) holds up the trophy that her company won during the seventh edition of the Bangkok International Film Festival. Directed by Raya Martin, it also bagged the NETPAC Award, which came with a certificate also shown in the photo above.

Filipino filmmakers bring good news to their countrymen as thousands recover from the destruction brought about by typhoon Ondoy.

The black-and-white film Independencia bagged two prizes in the 7th edition of the Bangkok International Film Festival. Imburnal was given a Special Mention in the filmfest that took place in Thailand from September 24-30.

Independencia was the Grand Prize winner in the Southeast Asian Category and the recipient of the NETPAC (Network for the Promotion of Asian Cinema) Jury Prize Award. The period film set during the American colonization of the Philippines stars Sid Lucero, Tetchie Agbayani, and Alessandra de Rossi.

Meanwhile, the 2008 Cinema One entry Imburnal shared the Special Mention honor with Malaysian James Lee's Call If You Need Me.

Another Filipino indie film, Aurora, also competed in this year's edition of the Bangkok IFF.

The jury of the Southeast Asian Category was composed of Vincenzo Bugno, Royston Tan, and Tul Waitoonkiat.

Brillante Mendoza served as a jury member in the main competition of the Bangkok IFF and his obra Kinatay was screened in the non-competition section.

The Piolo Pascual-starrer Manila was also be screened in the Southeast Asian Panorama section. It was recently announced that the film, co-directed by Adolf and Raya, would compete in a separate film festival that will take place in Warsaw, Poland. (CLICK HERE to read related article.)

The jury awarded Independencia the Grand Prize in the Southeast Asian category "for its strong cinematic expression. The film is visually adventurous with humor, expressing historical aspects while also very friendly to the audience."

Meanwhile, Imburnal earned a Special Mention "for putting together a very risky concept with complicated sociopolitical background, and for the director's courage and bravery."

The NETPAC Award was given to Independencia "for its cinematic creation exploring the history of the Philippines and the history of Philippine Cinema within the limited space and with a few characters."