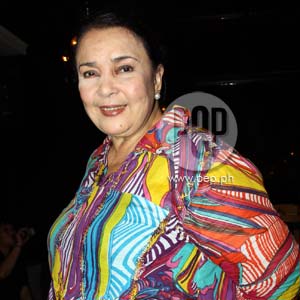 "Ito lang? Dahil dito you [Joey] put us through the nightmare?" was Amalia's reaction after finally coming face to face with her estranged husband's alleged mistress at Camp Karingal. Angelica Aznar-Sierra was arrested on libel charges on October 2 but was able to post bail.

Amalia Fuentes says she is "finally free" of the shadow of former husband Joey Stevens, two years after separating from him. They had been married for 28 years.

In the early hours of Friday morning, October 2, Joey's alleged mistress, Angelica Aznar-Sierra, was incarcerated in the holding cell of the Criminal Investigation and Detection Unit of the Quezon City Police District (QCPD-CIDU) at Camp Karingal, Quezon City, after being arrested due to a libel case filed by Amalia's son Geric.

Even though Sierra was able to post bail of P10,000 at 8 a.m. to get her temporary release, Amalia said she was still "happy" about the turn of events.

Geric filed the libel case after Sierra charged him with unjust vexation and filed two libel cases against him last June. Just like Sierra, Geric also had to pay a bail of P10,000 to get out of jail. Amalia told PEP (Philippine Entertainment Portal) in an earlier interview that the cases against Geric, which she claims were orchestrated by Joey, were "a clear concoction and is untrue." (Click here to read related story)

COMEUPPANCE. In an exclusive phone interview that Friday afternoon, the veteran actress told PEP that seeing Angelica in jail caused her to "remove all feelings left in her heart" for her former husband.

Amalia, who was accompanied by Geric to Camp Karingal, said seeing her former man's alleged other woman all "ugly and dirty" in the jail cell made her feel "euphoric."

"Last night she had her comeuppance," she added. "Masaya ako na ganito lang ang babaeng 'to."

Amalia told PEP that she wanted to separate from her husband of 28 years after she discovered his "illicit" relationship with Sierra. After finding that the two have a child of their own, the veteran actress said she "kicked" Joey out of her house.

Amalia also filed a temporary protection order (TPO) against Joey because she claimed he was sending her death threats. The court has not yet produced a resolution on both the legal separation and the TPO.

POLICE REPORT. A spot report obtained by PEP last night from the QCPD-CIDU at Camp Karingal indicated that Sierra was arrested after a warrant of arrest was issued on her by the Honorable Bayani V. Vargas, presiding judge of Quezon City Regional Trial Court, Branch 219.

It said three policemen from CIDU conducted an operation that "resulted in the arrest of Angelica Aznar-Sierra, 38 years old, single... arrested for a case of libel in his [sic] residence" at the Manila Luxury Condominium in Pasig City. A bail of P10,000 was also recommended for her "temporary liberty."

The report, titled "Re-Arrest of a Wanted Person" and dated October 2, 2009, was signed by Superintendent Gerardo R. Ratuita, chief of the QCPD-CIDU.

IN JAIL. According to Amalia, she received information that Sierra was arrested on the night of October 1, so she went to the police station around 9 p.m.

Amalia said the woman, who was accompanied only by her lawyer, was averting her eyes. Since she couldn't talk to her, Amalia said she just made snide comments that she was sure Sierra heard.

The veteran actress added that Sierra and her lawyer did several actions to delay going inside the cell.

At about 1 a.m., Amalia said she and her son became hungry so they left the police station to buy food. Coming back an hour later, she said she didn't see Sierra inside the station anymore.

"She was already in jail," she said. "Tinanong ko yung isang inmate, sabi sa 'kin nakahiga na malayo sa pinto. I didn't leave until I saw her incarcerated with the other female inmates."

Before leaving, Sierra's legal counsel tried to approach Amalia but she shouted at him, "Tell your client to stay away from a married man!"

"ITO LANG?" The morning after the visit to Camp Karingal, Amalia said she felt "down" remembering the image of the woman.

"Na ito lang? All this? You [Joey] made me go through this hell?" Amalia asked. "Dahil dito you put us through the nightmare?"

Seeing the woman finally allowed her to lose all love for Joey.

"If there was anything left in my heart, when I saw her, it got lost," she said. "I realized I was also a big fool for being such a naïve woman... I believed him completely during our marriage when he was a cheat and a liar."

Amalia added that the arrest of the woman was just the start of a barrage of cases that she is planning to file against her former husband. She said she is pursuing more lawsuits not for herself, but for other women who are in the same situation.

"I know this is just the beginning. I am fighting not only for myself but for other legal wives subjected to yung babae ang nagha-harass. Gusto ko ma-change ang laws... to correct this injustice to women," Amalia said, referring to our adultery laws that have been criticized as unfair to women, because it puts a heavier penalty on women than on men.

Amalia said she is angrier at Joey and not at his alleged concubine.

"My anger is not directed towards her. She just happened to be in the middle, siya ang tinamaan," she ended.