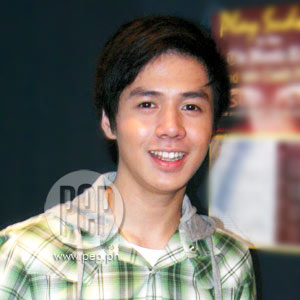 "I wasn't really able to experience the whole high school life that everyone is raving about, that 'it's the best time of your life.' I totally miss that part of the teenage years. But I wouldn't have it any other way with what I'm doing right now," says Sam Concepcion about his education.

Sam Concepcion is happy with the way things are going since he accepted the opportunity to become an ambassador for the Department of Education (DepEd). He has gone to a lot of places like Iloilo, Davao, and General Santos City.

"I think it's been a year na. I go around the schools in the country. We go out a lot sa mga provinces," the young singer said at the launch of a DepEd competition held at the Manila Ocean Park last Thursday, November 12. Sam helped launch the DepEd and JNBM PaperClay art nationwide competition that will run until February 2010.

"Actually, it's a big responsibility. It's something that one should not take lightly. I acknowledge that I am able to share the things that DepEd wants to share with the youth. And just to be able to interact with them and be around them is just a big thing for me," he said.

"I've learned so much with my experience here with DepEd. I've met thousands of high school and elementary students. It's really hard to understand that some of them are so passionate about their school. They really want to finish. You really see how much they want to learn, how much they want to have a better future.

"Maraming tao na akala yung mga kabataan ngayon are just having fun. Some are doing drugs or whatever. But there are still some that are doing so well and want a good future. And they're really immersing themselves, getting into extracurricular activities. They are the energetic group of young students. All it takes is the support from people around us," Sam said.

Sam also said that he tries to be responsible as well with his studies.

"I try not to mind the pressure. I just try to do well," Sam said. "Who wouldn't be criticized if you're failing naman in school. But I try to do well and prioritize things."

HOME SCHOOLING WHILE WORKING. The 17-year old Sam said that he is entered in home school program in an international school. He is in the 10th grade and it will take him about two more years before he reaches college.

"You know, when I was in regular school during my elementary years, I loved Math. Of course, it was regular school, regular set-up. You have a teacher. But now, it's kinda been harder. You actually try to understand it on your own. Now you see numbers on your computer screen and like...," he pauses with a puzzled look on his face, like he's stumped. "It takes a lot of effort right now and it's a bigger challenge for me."

Sam said that he is still enjoying high school, "One thing I'm happy about home schooling is it give me more time to think about what I would take for college. Coz if I were in regular school, I would be in first year college na. Right now, I haven't decided what my course would be. Sometimes I think about it."

Sam admits, "Since I was young, I've been performing and I've been exposed to it at an early age. My curiosity as a child, it all went into performing, in the stage and in theater. So, all my creative juices were all poured out there. Parang, I didn't explore anything else. Maybe, if I take up something in college it might be in Music or Theater Arts," Sam muses as he thinks about his future.