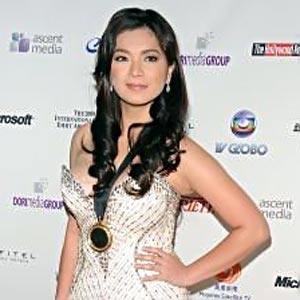 Angel Locsin attended the 37th International Emmy Awards gala at Hilton New York Hotel. The Filipino actress was nominated in the Best Actress category for her performance in Lobo, but she lost to veteran British actress Julie Walters.

Prior to the awards ceremony, the Philippines had three nominations. Angel Locsin was nominated as Best Actress for her performance in Lobo, while ABS-CBN's Kahit Isang Saglit (A Time For Us) and GMA-7's Magdusa Ka got the nod for Best Telenovela.

Veteran British actress Julie Walters won Best Actress for her performance in A Short Stay in Switzerland. Walters is best known as Mrs. Molly Weasley in the Harry Potter movie franchise. She was also part of the film Mamma Mia!.

Aside from Angel, the other nominees in this category were Emma De Caunes for Night Birds (France) and Cecilia Suarez for Capadocia (Mexico).

Meanwhile, the award for Best Telenovela went to Brazil's India: A Love Story.

The Netherlands won the non-scripted entertainment category for The Phone, while the TV movie/miniseries award went to Germany's three-part The Wolves of Berlin.

Great Britain was the biggest winner that night with five awards. Aside from the performance categories, the other British winners included Dustbin Baby (children & young people), The Mona Lisa Curse (arts programming), and The Ascent of Money (documentary).

The winners were selected from among 41 nominees from 17 countries competing in 10 categories for International Emmys, honoring excellence in TV programming produced outside the U.S.

Although the Philippines did not bring home any award, to be nominated alone is already a big achievement. This only proves that locally produced TV shows can compete internationally.