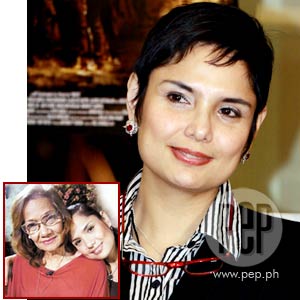 "My mom is my best friend no matter how much we fight and make up," said Snooky Serna whose mother Mila Ocampo (inset, left) passed away last week. She urges everyone to give their moms all the appreciation they can give.

The start of 2010 may have been joyful for many people in show business but the same could not be said for veteran actress Snooky Serna.

Five days after the start of the new year, Snooky's mom Mila Ocampo died due to emphysema leading to cardiac arrest.

January 10, four days after Mila's passing, Snooky poured out her innermost feelings about her mother who had stood by her through thick and thin.

In a live interview with Pia Guanio of Showbiz Central, Snooky related how she would now face life without her mom by her side.

Snooky revealed that she had taken lessons in CPR or cardiopulmonary resuscitation in the past and had attempted to revive her mom using this technique.

Snooky said she felt oblivious to everyone and everything around her as she tried to revive her mother, "in any way that you can..." she ended. When faced with the reality that their mother was no longer responding to Snooky's attempts, her brothers stepped in to do what they could.

LOVE-HATE RELATIONSHIP. Snooky admitted that her relationship with her mom wasn't always smooth. They had in fact had an argument just two weeks ago.

Her mom's frailty led to her admitting to Snooky that her disease was tiring her out.

This was just one of the arguments they'd had between them. Did they ever have an argument that divided them for some time?

Snooky is thankful that she was able to tell her mom that she loved her before she passed on. She feels, however, that she could have done more to express her love for her. It is one of her regrets. Is it hard to bear, especially with her mother's cremation two days ago (January 9)?

"My mom is my best friend no matter how much we fight and make up."

Snooky then took the opportunity to remind everyone—especially the younger generation—to be grateful for their moms. "Pahalagaan ninyo ang mga ina niyo because iba ang pagmamahal ng ina," she said.

"I feel such a loss," Snooky suddenly said. "Parang nawalan ako ng kalahati ng katawan ko. But I'm thankful to God because I know by faith that she is in a better place now."