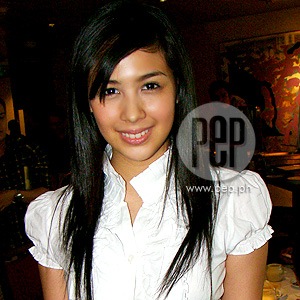 If given the chance, Kapamilya teen star Empress Schuck wants to be like her idol, young superstar Judy Ann Santos.

Empress, who turned 17 last Friday, February 19, got her first try on acting in 2002 via Jose Javier Reyes's 9 Mornings, topbilled by Piolo Pascual and Donita Rose. This movie won for her a Best Child Actress award in 2003. The same year, she was hailed as the Most Popular Child Actress by the Guillermo Mendoza Memorial Scholarship Foundation, Inc.

In television, Empress became part of ABS-CBN shows including the defunct youth-oriented show Abt Ur Luv and the kiddie fantaserye Super Inggo.

However, her role in the TV adaptation of the '80s film Underage, which was aired early last year, gave her a chance to lessen her "pa-cute" image. But she was quick to explain that this does not mean she's ready to do more mature roles.

Despite her almost eight-year stay in show business, Empress says she still has a lot to learn, especially in acting. So whenever there's a chance, she attends acting workshops at her home network to improve her acting skill.

How about being teamed up with a young actor?

Empress said she would be comfortable being paired with constant onscreen partner Dino Imperial.

Right now, Empress is busy with her studies since she's about to finish high school in Angelicum College this March. She's also being offered to appear in another independent film, but the young actress says it's not yet sure until they start filming it.