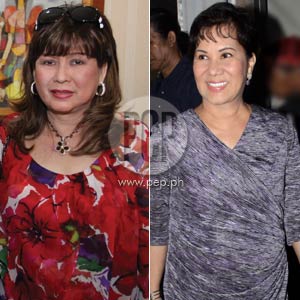 The slander case filed by talent manager Annabelle Rama (left) against GMA-7 executive Wilma Galvante (right) will push through, according to a Resolution made by former DoJ Secretary Alberto Agra.

The Department of Justice (DOJ) stood by its June 8 resolution that found probable cause for the filing of a P25-million slander suit against GMA-7 executive Wilma Galvante.

The new DOJ decision, signed by former Acting Justice Secretary Alberto Agra last June 28, maintained what was stated on June 8, that Quezon City Assistant Prosecutor Ronald Torralba had a "lapse" when he cited the "lack of probable cause" to dismiss the case on July 4, 2009.

The DOJ's June 8 decision instead ordered the Prosecutor to continue the filing of the the multi-million slander case against the network executive.

"We find no cogent reason to reconsider our resolution," the DOJ said on June 28.

Talent manager Annabelle Rama filed the slander suit against the network executive on April 15, 2009, after accusing Galvante of besmirching her reputation to one of her talents, actor JC de Vera, in a private meeting inside the network executive's office on February 16, 2009. (CLICK HERE to read related story.)

Galvante denied the accusation in earlier interviews. Prior to the slander suit against her, Galvante had filed a P7-million civil suit—damages with application for temporary restraining order [TRO] and/or writ of preliminary injunction—against Rama in a Quezon City court. (CLICK HERE to read related story.)

The DOJ's new June 28 decision was its response to a Motion for Reconsideration that Galvante filed on June 21.

The case is now expected to be raffled off in Quezon City courts.

Under Article 358 of the Revised Penal Code, those found guilty of Slander or oral defamation shall be subjected to arrest, imprisonment, and a fine of "not exceeding 200 pesos."

THREE OPTIONS. PEP (Philippine Entertainment Portal) called Atty. Alfred Villamor, Galvante's lawyer on the afternoon of July 5 to ask about their next options after the denial of their Motion for Reconsideration.

Atty. Villamor said they are considering three options: (1) to raise the objection to the Court of Appeals; (2) to ask the eventual court where the case will be filed to determine "under its judicial power" if there really is a valid probable cause to the case; and (3) to "fight the case" in court.

Atty. Villamor also expressed concern with the "short period" that the DOJ spent to resolve their Motion for Reconsideration, which took only seven days.

"Masyadong mabilis. Well, usually first in, first out diyan, e. Parang gano'n," he told PEP over the phone. "Pagkaalam naman na maraming backlog do'n, saka very unusual yung large number of resolutions that came out as Agra was about to step down."

PEP is open to both camps of Rama and Galvante should they want to add their opinion to the pending matter.